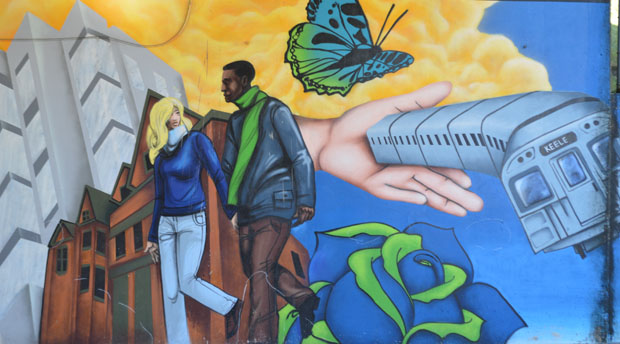 Opinion: The art of graffiti

graffiti5
In an attempt to clean up the city, Mayor Rob Ford announced in late July a new plan to get rid of the graffiti...

In an attempt to clean up the city, Mayor Rob Ford announced in late July a new plan to get rid of the graffiti on city property.

The mayor signed a contract, valued around $400,000 annually for up to four years, with Goodbye Graffiti, a Canadian graffiti-removal company.

But it seems as if the mayor might not see the whole picture.

Graffiti can in many ways turn a boring brick wall into a piece of art and it has the potential of decorating a neighbourhood or a community, which we see in, for example, Parkdale and ‘‘Graffiti Alley.’’

We also need to crush the notion that all graffiti artists are gang members or rebels. Many of the graffiti artists out there are simply pursuing their rights to freedom of expression and freedom of speech. It should be considered a valid form of art as any of the forms of art you can look at in an art gallery, such as the Art Gallery of Ontario and Brockton Collective. We even see graffiti artists doing commercial work.

At the same time, there’s a huge difference between ‘‘good’’ graffiti and ‘‘bad’’ graffiti.

When I was eight years old, my 13-year-old cousin took me with him to paint some squiggly lines on our school’s property. My cousin and his friend forced me to grab the spray can and make my contribution to this, in our minds, harmful crime. I painted two large soccer balls in bright orange on an old jittery wooden plank. It was not graffiti. It was pure vandalism.

Granted, no one would be happy to find spray paint on their own property, and nor should they have to. However, legal graffiti – when the artist has permission from the property owner – can show off some beautiful artwork and should be a part of our society.

To be able to enjoy the art of graffiti we’ll have to learn to live with the frustration of seeing squiggly lines on city property. This is not too high a price to pay for the possibility of transforming boring brick walls into amazing art projects.

The jittery wooden plank I once stained with my orange soccer balls is now long gone. Maybe it should’ve been replaced with a nice piece of graffiti that actually meant something.