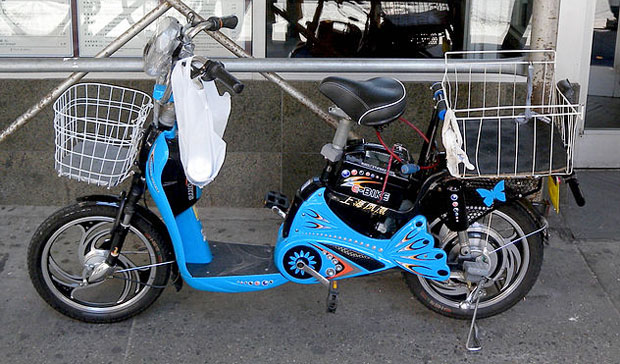 bikes5
For those looking for a fast way to avoid gridlock, e-bikes are becoming one of the best bets.

For those looking for a fast way to avoid gridlock, e-bikes are becoming one of the best bets.

‘‘You can beat the bus or beat the car to wherever your destination is. It’s just a fun way to get around,’’ says Greg Moore, owner of Ezriders, an e-bike retailer in Toronto.

According to Ontario’s Ministry of Transportation, an e-bike is a ‘‘power-assisted’’ bicycle that, among other things, weighs no more than 120 kgs and is equipped with pedals as well as a motor.

‘‘Basically, any electric-powered two-wheeled or three-wheeled bike under 500 watt and the speed limit is 32 km/h,’’ says Feng Zheng, a manager at the Toronto location of e-bike retailer EMMO .

E-bikes are regulated under the Ontario Highway Act, which states that e-bikes are allowed to travel on public roads and highways.

‘‘E-bikes are classified as vehicles, and have the same rights and responsibilities as other vehicles. E-bike operators must follow all the rules of the road as they apply to conventional bicycles and as part of our regular review of our existing laws, we continue to monitor e-bike issues,’’ says Ajay Woozageer, a spokesperson for the transportation ministry, in an email to Skedline.com.

In the email, Woozageer says the province has no further plans to regulate e-bikes.

In the city of Toronto, however, a bylaw states that e-bikes cannot travel in the bike lanes if being propelled by its motor.

Moore says there are two different types of e-bikes: the scooter style and the bicycle style.

The bicycle style is more for exercise whereas the scooter style is geared towards transportation, says Moore.

According to Moore, e-bikes also contribute to the local economy.

‘‘Most people on a bike will get of their bike and spend their money locally whereas in a car you probably wouldn’t,’’ says Moore.

An e-bike can also reduce your own expenses, as you don’t have to buy gas or insurance for your bike, says Zheng.

However, Zheng still sees some problems with e-bikes.

‘‘When an e-bike breaks down you do need people to help you, let’s say if you get a flat tire,’’ says Zheng.

For Moore, e-bikes are the future.

‘‘It’s limitless and it really opens the door to a lot of people that wouldn’t normally take advantage of getting outside, says Moore. ‘‘You can get as much exercise as you want. Instead of going on a five kilometer ride you can go on a 50 kilometer ride.’’

Photo by: Jim.henderson via Wikimedia Commons