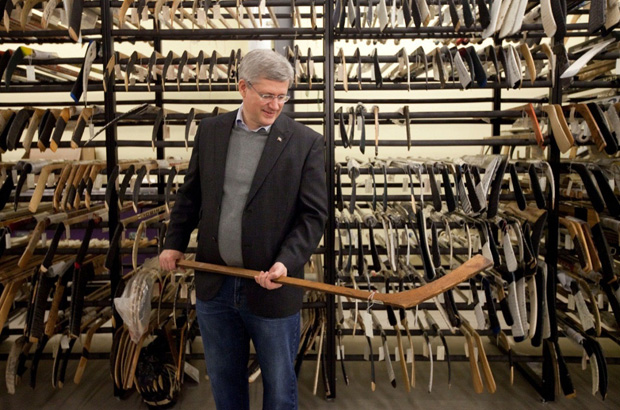 hockey21
Prime Minister Stephen Harper’s book on Canada’s favourite game could be viewed as a political move, but experts say if he’s looking to help...

Prime Minister Stephen Harper’s book on Canada’s favourite game could be viewed as a political move, but experts say if he’s looking to help himself in the coming election, the timing is wrong.

Stephen Harper holds a hockey stick from the 1907 Stanley Cup final during a research visit to the Hockey Hall of Fame in Toronto, Canada, December 2011 (CNW Group/Simon and Schuster Canada)

‘‘It would probably have a greater impact if it came out a month or two before the election. I don’t think it’ll be an issue in the campaign,’’ says Nelson Wiseman, an associate professor in political science at the University of Toronto.

Wiseman says he’s not even certain Harper will run in the coming election, scheduled for 2015.

A Great Game: The Forgotten Leafs & The Rise of Professional Hockey will hit shelves on Nov. 5. According to a press release from publisher Simon and Schuster, the book deals with the early stages of ice hockey in Canada.

Harper spent time at the D.K. Seaman Resource Centre – a division of the Hockey Hall of Fame in Toronto – for some of his research.

‘‘He’s a hockey fan, a through and through hockey fan. He was very pointed on the era, specific teams and specific players,’’ says Craig Campbell, the manager of the D.K. Seaman Resource Centre and Archives.

‘‘He really knows his stuff. He speaks about players back then as people today will speak of Sidney Crosby. People just knows his career, while the prime minister is able to recite the career of players you’ve never heard of, but collectively helped shape the history of the game,’’ says Campbell.

For the final version of the book, the prime minister had the assistance of hockey author Roy MacGregor who declined Skedline’s request for an interview, saying the book is Harper’s and he should be the one to talk about it.

A Great Game: The Forgotten Leafs and the Rise of Professional Hockey (CNW Group/Simon and Schuster Canada)

Harper started working on the book before elected prime minister, but always made a point of not having it interfere with his day job, Campbell says.

‘‘I first met him when he was the leader of the opposition. He always made a point of coming into the hall after-hours or during non-working hours,’’ says Campbell.

As a member of the Society for International Hockey Research, Harper has previous experience of promoting the early stages of hockey.

In an email to Skedline, SIHR president Jean-Patrice Martel says the prime minister was ‘‘actively involved’’ in getting a plaque and grave marker put up for James A. Creighton, often referred to as the ‘‘father of organized hockey,’’ at the Ottawa Beechwood Cemetery.

Campbell says the book will promote a different era of hockey, which is often overlooked.

‘‘Hopefully, fans will look at this as something fresh. I think it’s really unique that our prime minister is writing a book about hockey, which is one of Canada’s greatest exports,’’ says Campbell.

Regardless the motive of the book, Wiseman says it contributes to Harper’s public image.

‘‘It does make him look like he’s got much in common with the common man. That’s the same reason you see him having a coffee at Tim Hortons,’’ says Wiseman.