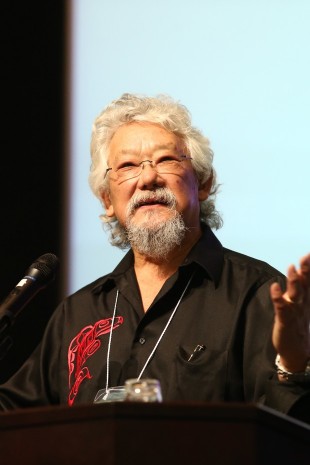 David Suzuki has been named Canada’s most admired person in an ongoing public-opinion poll conducted by the research firm Angus Reid. Fifteen candidates were...

David Suzuki has been named Canada’s most admired person in an ongoing public-opinion poll conducted by the research firm Angus Reid.

Fifteen candidates were selected from “a list of fairly high profile Canadians,” said Shachi Kurl, vice-president of Angus Reid. They were either well-known Canadians of past or present fame, or “had been the subject of recent headlines across Canada,” in order to make the cut.

Kurl found it “a bit of a surprise” that Suzuki was voted Canada’s most admirable person, but admitted that “he’s made some major headlines over the summer, that have contributed to his fame.”

“He’s [Suzuki] come under attack from people at Sun Media and similar outlets,” said Ian Hunnington, staff member at the David Suzuki Foundation. “And this just goes to show that people aren’t paying attention to that, but to his hard work as an environmentalist.”

“His message is getting through to people,” added Hunnington

Pollsters were asked to respond to each nominee by claiming they ‘admire,’ ‘did not admire,’ or ‘did not know’ the Canadian in question.

Paralympian Rick Hansen was second next to Suzuki, the CBC’s Peter Mansbridge third, and novelist Margaret Atwood fourth. Prime Minister Stephen Harper found himself in the sixth spot behind Liberal leader Justin Trudeau, with 23 per cent of respondents claiming they admire the current Prime Minister while 34 per cent favoured his Liberal counter-part.

The 1017 respondents voted John Furlong, the man behind the Vancouver 2012 Olympics, to be the least known Canadian on the list. The least admired, though, is Conservative Senator Mike Duffy, who is the subject of an ongoing expense scandal in Ottawa.

“We tend to ask questions like this to gauge public opinion on current political players, or to see how high-profile Canadians are affected by headline grabbing news stories,” said Kurl

This poll is the first in an ongoing series of Canada’s most admirable people. Names will be added and dropped off the list to better reflect what Canadians think.

Kurl would not say what names to expect in the future, but to “stay tuned – there may be some surprises”.