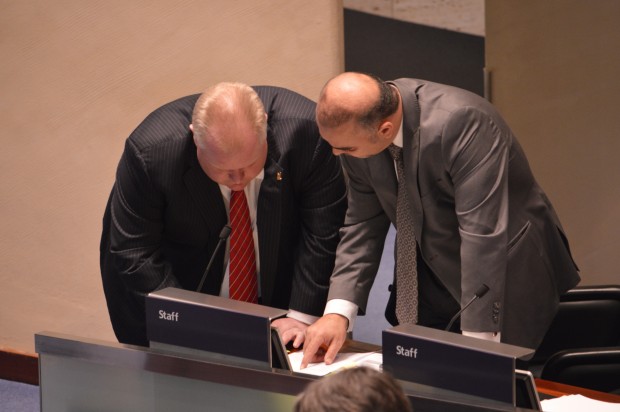 After a chaotic meeting Ford now ‘Mayor in name only’

Toronto Mayor Rob Ford’s budget and powers were curtailed in a chaotic meeting at City Hall, that saw the city’s top elected official effectively reduced to Mayor in name only.

The motion, which passed with a large majority, transferred many of the mayor’s power, staff and budget to Deputy Mayor Norm Kelly’s office, and removed many of the Mayor’s special abilities within meetings, such as setting key items or the ability to speak last on an item.

Mayor Ford and his brother, Councillor Doug Ford, went on the offensive against their colleagues on Monday, accusing other councillors of drunk driving and drug use – a stark change from the agenda items and and special meetings of last Wednesday and Friday, when even Mayor Ford conceded he understood why council was scaling back his powers.

Amid the chaos, Mayor Ford ploughed into Councillor Pam McConnell while sprinting across the floor, knocking her onto the ground. McConnell left the chamber for a time, and returned with an ice pack on her face. Speaker Frances Nunziata called a ten-minute recess at that point, and said that any more disruptions from the public would result in people being ejected.

Prior to the vote deciding the future of Mayor’s office, Ford told councillors if they voted to pass any of the motions against him, they’d be telling “everybody that voted in the last election that their vote does not count.”

Mayor Ford said what was happening was a “coup d’etat,” and compared the situation to Iraq’s 1990 invasion of Kuwait.

“You just invaded Kuwait,” he said, after the final vote.

Councillor Ford tabled a motion to have an election during winter 2014, rather than waiting until October of 2014, but the motion was ruled out of order. The Mayor’s brother also grilled city staff about the legality of Monday’s motions, and criticized the City for hiring their own legal counsel, Toronto lawyer Freya Kristjanson.

Kristjanson was retained an hour and a half before the meeting in anticipation of the Ford brothers threat of legal action. Mayor Ford’s lawyers, who were in the council chambers, spoke frequently with him through Monday’s meeting.

Earlier in the day, council addressed the three remaining items from last week’s regular meeting. All the items had been held by Mayor Ford and were debated. Despite the hold and debate, all three passed unanimously.