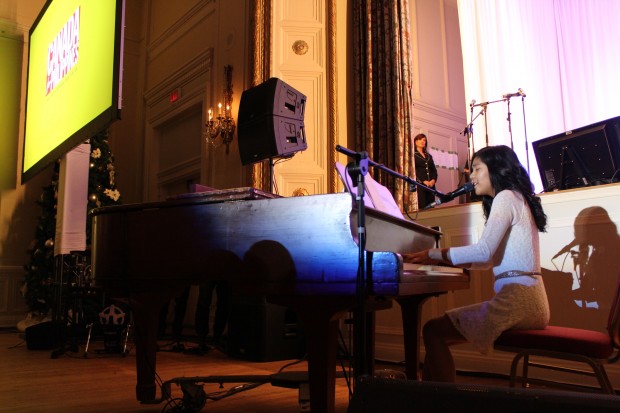 World Vision and the Kol Hope Foundation held Canada for Philippines, a benefit concert with both Canadian and Filipino performers in order to raise...

A benefit concert featuring Canadian and Filipino performers was held in Toronto last week to raise money for survivors of Typhoon Haiyan.

The concert was organized by World Vision and the Kol Hope Foundation. It was held at the Fairmont Royal York on Sunday Nov. 24 and was organized by Filipino-Canadian BPM:TV personality, Jeff Rustia, along with his mother, Melinda Rustia, president of the Kol Hope Foundation. Performers included artists from Canada like the Airplane Boys, Lights, and Amy Sky. Toto Bansil, a popular Filipino artist, was flown in from Manila for the event along with Filipino supermodel, Karina Cabiling.

CEO of World Vision Canada, Dave Toycen, said he left it to the Rustias and the Filipino community to organize the event.

“I think it’s natural that they would be concerned about their connections back in the Philippines but at the same time it says to Canadians that these people who are really serious about helping and it inspires all Canadians,”said Toycen.

“Well, we basically have been focusing on food and water particularly and also we’ve started up something called ‘child friendly spaces’. They’re usually tents where children can come and play,” Toycen said.

“When there’s a lot of destruction, there’s nothing for them to do that’s safe and then also if children are separated from families, there’s also an opportunity for them to be there as well.”

According to World Vision, the organization has so far raised around $3.2 million and has provided food, clean water,  and hygiene supplies to over 25,000 people affected by the typhoon. Toycen says the goal is to help 400,000 children and adults. He urges Canadians to pick any organization or charity doing work in the Philippines to help support the relief effort.

Among the performers Sunday night was 13-year-old YouTube sensation, Maria Aragon, best known for cover of Lady Gaga’s ‘Born this Way’  and her performance on stage in Toronto with Gaga three years ago.

“When I talk about the Philippines, it’s really personal. My experience there was so amazing and the people I met there were so friendly, so kindhearted, and so generous. I’m just so proud to come from that country,” said Aragon.

“I wish I could go there personally and help out but I think right now the only thing that I can do is help out with my music and that’s what we’re trying to do tonight and I’m really happy that all these people came to support.”

Aragon performed ‘Runaway,’ an original song, and ‘Born this Way.’ Aragon said she has been traveling back and forth between her hometown, Winnipeg, and San Francisco, recording her new album which she hopes to release in the coming year, adding her school work comes first.

Toronto artist, Lights, and her manager, CBC Radio host, Jian Gomeshi,  shared their experiences when they traveled to the Philippines as World Vision ambassadors. Gomeshi told an anecdote about how pop culture helped him connect with the kids there when  he spoke  to a class of 7-year-olds who mostly did not  understand English.

“I say the words ‘Justin Bieber’ and the whole class lights up in front of me. And then channeling my best 16-year-old Biebs, I start singing a Justin Bieber song and what do I find out?” said Gomeshi. “That these kids who have nothing and live in terrible circumstances and are trying to make something of their lives and are 6 and 7-years-old and don’t speak English know every lyric to every Justin Bieber song.”

The night  closed off with two songs by Lights, and a medley of Broadway performances.

Donations can be made to World Vision via its website. Other organizations providing disaster relief include The Canadian Red Cross and UNICEF.

International Development Minister Christian Paradis announced Wednesday, Nov. 27 t he period has been extended to Dec. 23 from Dec. 9 for Canadians to donate to the fund where the federal government will match all donations.