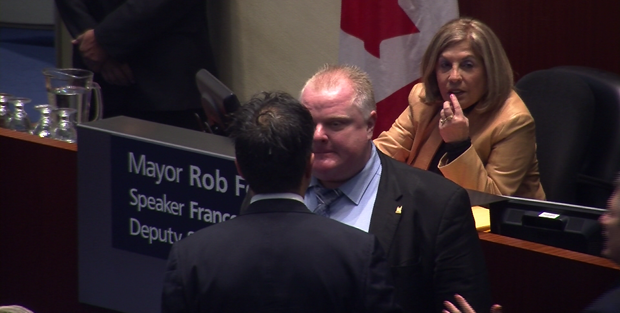 Coun. Minnan-Wong doesn’t back down to Ford fury

The item was an originally a motion from Coun. Denzil Minnan-Wong (Ward 34 Don Valley East) and was voted upon by city councillors in five parts.

Mayor Ford was asked to apologize for misleading council about the existence of a video depicting him smoking crack cocaine, cooperate with police investigations in regards to the video, apologize for writing a character reference for Alexander ‘‘Sandro’’ Lisi on city letterhead, answer council directly on these subjects rather than going through the media and to take a leave of absence to work out his personal issues.

The debate was in no short supply of heated moments as Ford answered questions from his colleagues.

The heated moments sometimes resulted in shouting matches, which caused speaker Frances Nunziata to call a pair of five-minute recesses through the morning.

Prior to debate on the Mayor’s key item, a quiet confrontation happened on the chamber floor between Mayor Ford and Coun. Minnan-Wong.

The councillor alleged the Mayor threatened him and requested a formal apology. This was received with ridicule from the Mayor and his brother, Coun. Doug Ford (Ward 2 Etobicoke North), and the Mayor refused to apologize. He eventually did say “sorry,” after a recess.

Minnan-Wong asked the mayor if he had purchased illegal drugs in the past two years. Ford said “yes” after a long pause.

Not long after Minnan-Wong’s question, Doug Ford went on the attack, asking Minnan-Wong if he had ever smoked marijuana. He did not receive an answer and a second recess was implemented after the brothers and Minnan-Wong had a brief face-to-face confrontation.

“Are you going to go smoke a joint now, Denzil?” Coun. Ford asked, as he left the chamber at the brief recess.

The debate carried on through the morning and after the 12:30 p.m. lunch break.

The break was not a slow-paced one, as a large anti-Ford protest took place in Nathan Phillips Square, outside City Hall.

Redacted elements of the Project Brazen II document were also released around lunch, which revealed more details of the Mayor’s connections with Sandro Lisi.

In the afternoon, Coun. Giorgio Mammolitti (Ward 7 York West) suggested all councillors participate in random drug testing as a measure of levelling the playing field. Mayor Ford then tabled a motion requesting that all councillors participate in hair drug and alcohol testing by December 1, saying he would cover the necessary funds. The motion was ruled out of order by Nunziata, but Ford will be allowed to submit the motion for December’s council meeting.

All five elements of Minnan-Wong’s motion were passed by council.

November’s meeting will continue through Thursday and likely into Friday. Two special council meetings have been planned for Friday as well.

The meeting’s second day will begin Thursday at 9:30 a.m.