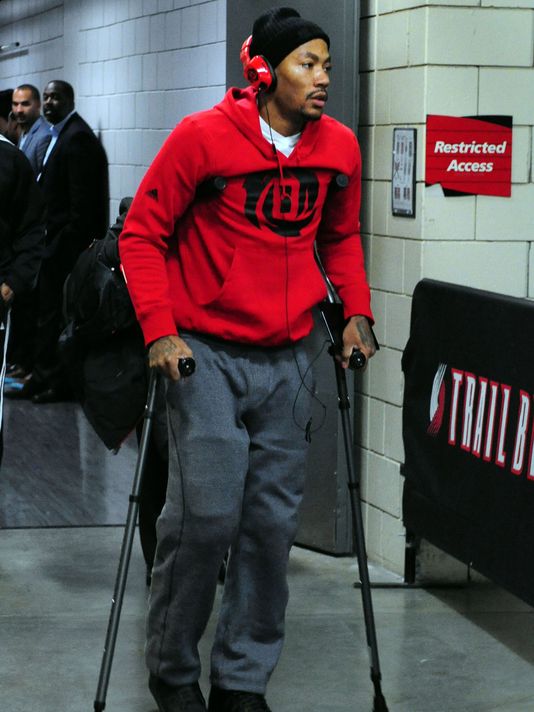 During the third quarter of the Bulls game against the Portland Trailblazers, Chicago point guard Derrick Rose suffered a knee injury – his second – leaving many doctors and sports experts wondering how it will affect him in the long run.

Rose was the MVP in 2011 and was considered one of the elite point guards in the NBA before suffering a torn ACL in his left knee during a first round playoff game against the Philadelphia 76ers. Rose had surgery during May of 2012 which sidelined him for the remainder of the playoffs and the whole of the 2012-13 NBA season.

Rose made his much publicized return this season but has not been performing at his once MVP status. Before Friday night’s game, the Chicago Bulls had a record of 6 wins and 4 losses. Rose is only averaging 15.9 points per game which is much lower than his career average.

The injury happened as the Bulls were on the offense. Rose was making a run to the rim when, witha  a wobbly step, his right knee buckled. Rose tried to run back to defend but was unable to put much pressure on his knee. After leaving the game, he was brought to hospital to have an MRI on his knee, where doctors found a medial meniscus tear that will need surgery. The Chicago Bulls announced Rose would miss the remainder of the season.

Dr. Amitkumar Upadhyay is a physician and emergency room doctor from Aurora and has dealt with injures like Rose’s.

“The Meniscus tear is very painful; it is not as bad as the ACL though,” said Dr.Upadhyay. “His injury was probably caused because many athletes after suffering an ACL tear begin to rely heavily on there other leg for support which then causes more tension and ware to the knee.”

Derrick Rose had already missed the whole of the 2012-13 season to recover from his ACL tear and many questioned why he had taken so long to return.

“Recovering from the injury physically is only one aspect, but the mental part is the hardest,” said Dr. Mark DeLuca, sports psychologist in Oak Ridge, Ontario. “For an athlete like Rose the problem would be can he mentally feel as if he could get back to that MVP level.”

Dr DeLuca is not sure if Rose will return to be the player he once was.

“I’m not sure if that is possible, I mean I don’t know Derrick personally so I can’t really tell, but I mean for basketball your knees are so important and just coming off such a huge injury and all the hype around it won’t be easy but I do feel he will be back but not anywhere close to what he once was mentally and even physically.”