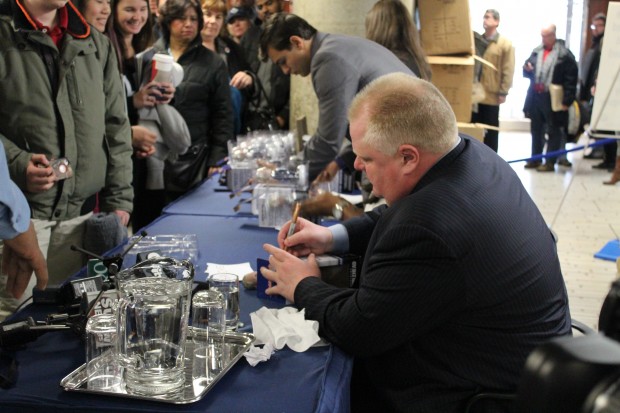 Toronto Mayor Rob Ford signs his bobblehead as onlookers wait to buy the $20 dolls and have their photo taken with Ford in a United Way fundraiser at City Hall Tuesday.- Photo by Joyita Sengupta

Bobbleheads of scandal-plagued Toronto Mayor Rob Ford had people lining up as early as 5 a.m. Tuesday to buy the autographed dolls to help raise money for the United Way.

“The mayor’s office approached city staff about two months ago in September and talked about doing something to raise funds for the United Way and it was their initiative,” said Jackie DeSouza, the city’s strategic communications director.

“They came up with this bobbleheads idea and we thought it was a great idea and encouraged them to move forward with it.”

Only 1000 bobbleheads were available to the public at a price of $20 each. A few of the dolls had been given out the day before to members of the media. Mayor Ford sat at a table in the lobby of city hall Tuesday to sign each bobblehead and have his picture taken with people who bought the dolls. The sale was limited to one doll per person.

The bobblehead fundraiser happened on the eve of Wednesday’s city council meeting where motions to suspend the mayor’s powers and take a leave of office will be discussed. The mayor has admitted he smoked crack cocaine and a video bought and released by the Toronto Star last week shows an intoxicated Ford threatening to kill an unnamed man.

A United Way representative wrote in an email statement to Skedline.com that, “every workplace campaign is responsible for making their own decisions around fundraising activities and initiatives.”

DeSouza said she was not concerned with the recent controversy surrounding the mayor.

“We encourage all councillors’ offices, mayors’ offices and city divisions to come up with fundraising ideas for the United Way and this was a very creative idea that they came up with,” DeSouza said.

DeSouza said $11.80 from each bobblehead purchase will go to  the United Way and each doll took $8.20 to make.

‘Robbie Bobbies’ have already surfaced for sale on eBay and Kijiji, going for as much as $350.

Police chief Bill Blair announced on Oct. 31 that the Toronto Police Service were in possession of a video in which Ford is allegedly seen smoking crack cocaine. Five days later, the mayor admitted that he had smoked crack sometime in the past year in what he calls a “drunken stupor.” Two days later, the Toronto Star purchased and released a video of Ford behaving erratically and uttering death threats in a dining room.

The story was picked up by international news networks as well as popular American late night shows including the Daily Show with Jon Stewart.

City council is set to meet tomorrow to tackle a number of motions including one proposed by Coun. Denzil Minnan-Wong that Ford take a leave of absence from mayoral duties to focus on dealing with his potential substance-abuse problems.

The mayor’s brother Coun.Doug Ford  greeted people waiting in the bobblehead lineup. He said he expects his brother will be flogged at tomorrow’s council meeting.

“Just going into council really. And they’re going to get up, 44 of them and give my brother a public beating,” said Doug Ford. “A public butchering and I’m going to have to stand there and watch it happen.”

Some people in line for the bobblehead said they were there to support the mayor while others said they were more interested in the novelty of the event.

Richard Feren is the writer and creator of a popular satire Twitter account known as @TOMayorFrod. He says he waited a little over two hours to buy a bobblehead and even had the mayor autograph the doll as “Mayor Frod.”

Richard Feren, creator of the satirical @TOMayorFrod Twitter account, poses with his bobblehead, signed by the mayor and purposely misspelled to reflect the Twitter handle.- Photo by Joyita Sengupta

“I’m sure there are supporters here but I think they’re outnumbered by people here for the joke of it,” said Feren. “Most people are here because it’ s just so unusual. It’s a memento of an era of city hall that is soon drawing to a close.”

Mike Dimopoulos, a Toronto resident, said he was there to  show support for the mayor and has been a supporter since Ford’s mayoral campaign.

“He’s willing to save. He’s willing to help the city out. Everyone has their mistakes but I mean, look what he’s already done,” said Dimopoulos. “You weigh your options, I think him saving millions for the city has outweighed his tit-tat mistakes.”

Dimopoulos said  he plans on gifting the bobblehead to his nephew.

Mayor Ford continued to sign dolls using a gold Sharpie marker and thanked attendees for their support. He has said in the past week that he does not plan to step down and told reporters Monday  Coun. Minnan-Wong’s motion would be the first issue on the agenda for tomorrow’s meeting.