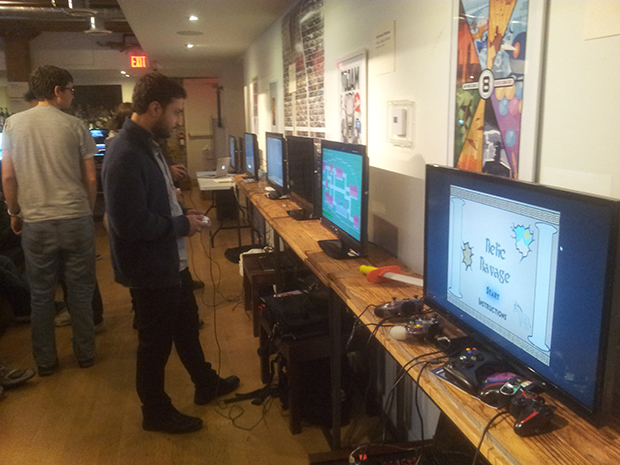 Indie game developers from Toronto and around the world gathered at Hotel Ocho last Friday to share and discuss the joy of game design....

Indie game developers from Toronto and around the world gathered at Hotel Ocho last Friday to share and discuss the joy of game design. A myriad of small independent games filled the hotel rooms, there to be discovered by gamers and developers alike. The chatter of excited discussion and music filled the lobby, while the rooms were dominated by the light and sound of the games on display.

It’s called Gamercamp. It’s a festival that has been devoted to the celebration of the development and enjoyment of indie video games for the past five years. A $15 ticket g0t fans access to a variety of independent games, some of which were on the yet to be released  (but greatly anticipated) Playstation 4 as well as a pair of virtual reality goggles called the Oculus Rift.

In addition to the actual game displays, a series of industry talks were held on subjects from romance in games to coding tutorials. The mix of industry discussion and interactive activity maintained a professional but welcoming atmosphere.

Arthur Marris, one of Gamercamp’s festival producers, describes Gamercamp as a “mixture of two different kinds of gaming festivals” that are found in the games industry.

“The first one being [the Game Developers Conference]: very conference-y, very business-y, where it brings devs together to talk about development in particular. The other kind of games festival are the ones about the consumer,” said Marris, “And, you know, that’s where players get to see the games before they are released and get to really experience that sort of closeness with the developers. So I think that Gamercamp is doing a great job blending the two together.”

Gamercamp is fuelled by its community. While the games were the main attraction for the fans, the developers were there to catch up with and meet their peers in the indie game industry. Developers from every degree of success and experience met as equals to discuss and geek out over each other’s ideas.

“That’s my favourite part,” said Damian Sommer, a 23 year-old full-time indie game developer from Toronto. “Having people, like, people who are from out of the city, or who I don’t normally get to see … I get to see a lot of people that I only get to see a few times a year or even just once a year.”

Arthur Marris says that the mix of local and international talent is a major part of what makes Gamercamp special.

“I think a really big part of Gamercamp being a huge success is that we are always surrounded by brilliant talent from the developers locally, but also internationally as well, ” said Marris, “A few of the games that are in our arcade this year are from Europe [and] from the US.”

“You know, I think that there’s this idea that when you are trying to accomplish something that the way to do it is to seem staunchly autonomous. And we get a lot of stories of solo geniuses, you know, who kind of figure it out by themselves in these sort of meteoric rises,” says Woo, “And what we know though, the stories we hear, are that people are supported and inspired and really require other people around them who provide advice, or who provide encouragement, or provide reality checks.”

A support network is what Woo wants to build, “Because that is the way we have the best work coming out.”