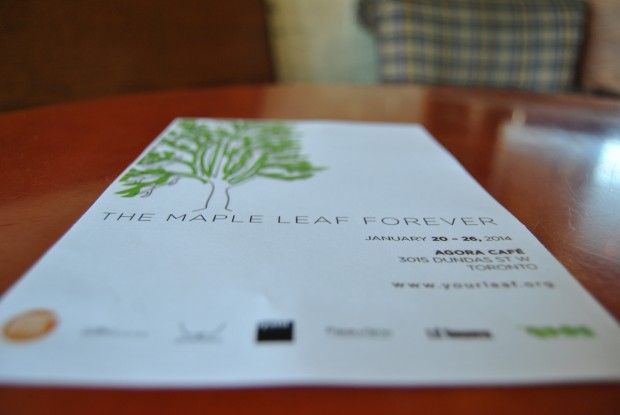 As Toronto cleans up the trees crushed by last month’s ice storm, an art exhibit is showing how the death of an iconic maple inspired some unique wood recycling ideas.

An organization called Local Enhancement and Appreciation of Forests (LEAF) partnered with the city last fall to reuse the wood from the Laing St. tree.

The city, working alongside IIDEX, a trade and architecture show, created four pieces of art that are now on display at Agora Café in Toronto until Jan. 26.

IIDEX selected four local designers from its’2013 IIDEX Woodshop exhibition to volunteer their time to create the pieces from the legendary Laing Street tree.

Designer Paus + Grün crafted a decorative wall piece made with maple branches, paper, and LED lights. The National Design Collective made headphones that represent the musical history the maple held for Canadians. Dystil created a piece that resembles a witch’s broom while designer Brothers Dressler made a light fixture that is supposed to highlight the possibilities of the material.

The exhibit, which is curated by LEAF, is a part of the Toronto Design Offsite Festival (TODO). After the festival is over, the four pieces will be auctioned off by LEAF for its urban forest programs which include planting education and training. Details of the auction are yet to be finalized.

“When the tree fell last year, a lot of people were interested to see that the tree did not get chipped up,”  she says.

Stewart says LEAF looks at the full life of the tree, including its use after the tree dies.

Senior Advisor of Toronto’s Green Sector, Rob McMonagle, is working towards urban wood utilization as well. He says the ice storm can be used to promote the possibilities of using fallen or dead trees for more than wood chips.

This year, that number will be higher as storms targeted thousands of trees.

Although cleanup of debris is slated to be complete in about another six weeks, McMonagle says cleanup time only considers the limbs and branches that have fallen. Trees that have died and are left standing have not been taken into account yet.

“Those still standing could be used for saw logs,” says McMonagle.

Toronto’s 2013 Urban Wood Directory quotes the value of saw logs at $15-45 a log. The directory says a very large tree may only hold three or four logs of solid wood.

The city says the damage to Toronto’s urban forest is $50 million.