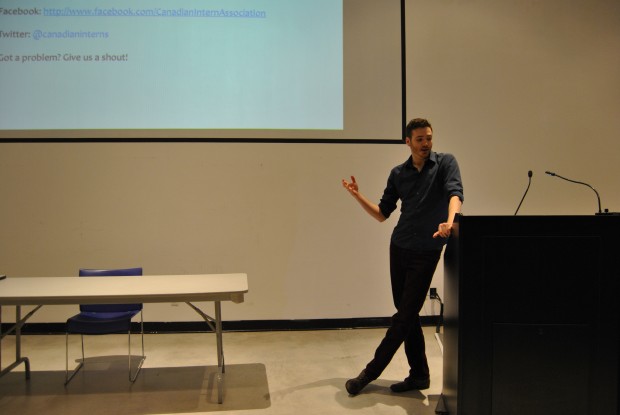 Internships worth at least $10.25 an hour

internships7
The Canadian Intern Association held a labour and intern rights workshop this Thursday at Ontario’s College of Art and Design. Vice President of Outreach...

The Canadian Intern Association held a labour and intern rights workshop this Thursday at Ontario’s College of Art and Design. Vice President of Outreach at the CIA, Tom Haxell spoke with an audience of five in one of the school’s lecture halls.

With the help of power point, Haxell outlined the labour laws that must be met when offering an unpaid internship.

Unpaid internships must include training that is similar to school, the employer must derive little or no benefit, the intern must not displace an employee, and the employer must not guarantee that an intern will be hired after an unpaid term. The intern must also be told in advance that they will not be paid for their work.  There is only one exception to the laws; if an internship is required to finish a program it is acceptable to not pay.

As a graduate of the event management program at Humber, Haxell says the belief was that you had to do an unpaid internship. “That was just the name of the game.” Growing increasingly frustrated with this ideology, Haxell joined the CIA.

With the “Claim Back Your Pay Campaign,” the CIA educates interns to consider asking for minimum wage before starting an internship, to record hours worked, as well as keep a record of work completed, which is needed when filing a claim against an employer. All claims must be made within six months after an internship has terminated, says Haxell.

Employment lawyer, Andrew Langille says “it’s really hard to tell what’s going on within the internship culture in Toronto or any other city in Canada. It appears the number of internships is being reduced, but we don’t have stats.”

Langille, volunteering as general counsel for the CIA, refers those interested to the right people to help with internship claims.

When contacted for legal aid, Langille will send a letter to the employer, and if there is no follow up, he proceeds to the courts. He says he typically goes through the ministry of labour which has a relatively quick turnaround of about six months. “Six months is quick when dealing with the legal system in Ontario.”

Kyle Ianuzzi, Vice President of Operations at CIA was successful in his claim last year against a wedding planning events company and received his fair pay. Haxell says “it takes a lot of guts to contact your employer to say ‘I’m filing a claim’—this doesn’t happen often.”

Created in early 2012 by law student Claire Seaborn to help unpaid interns connect, the CIA also features a wall of shame and wall of fame on its’ website to help those searching for internships to find a good placement, and avoid a bad one.

One of the five in attendance, OCAD’s organizer of the workshop, Emily Rourke says with a laugh, “now we all know not to intern at Bell.”

Bell is on the CIA’s wall of shame.