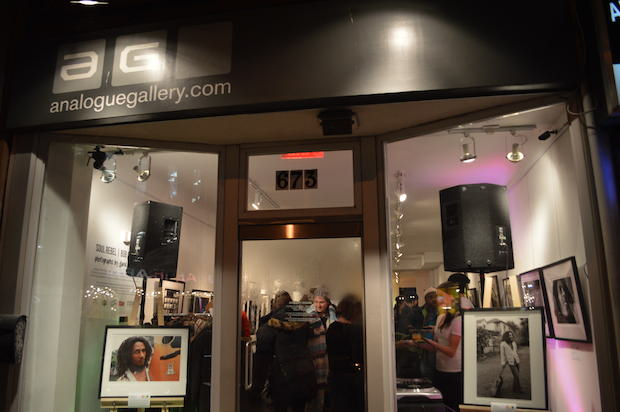 An intimate look at the life of the late reggae artist Bob Marley is on exhibit at Toronto’s Analogue Gallery.

David Burnett signs a book during the open day of his Bob Marley exhibit. His book Soul Rebel features pictures he took of the late Bob Marley.
Photograph by: Angelica Sydney

An intimate look at the life of the late reggae artist Bob Marley is on exhibit at Toronto’s Analogue Gallery.

American photographer David Burnett has put together a 200-page book, called Soul Rebel which features photos he took of Marley while an assignment for Time Magazine in 1976 and during Marley’s tour in 1977.

Reggae and art lovers gathered inside the gallery for the book-signing event put on by Lucia Graca, gallery owner and creative director of Analogue Gallery on Queen St. W. The event took place last Friday, Jan. 24 and the exhibit runs until the end of February.

“His agent in New York contacted me… I made it into three pages into the book and I was like yes when can we do it,” Graca says.

During his first trip to Jamaica in 1976, Burnett spent several days on the north coast of Jamaica. He met Peter Tosh, one of the band members of Marley’s band The Wailers, which eventually led him to meeting Marley.

“Well I went to Jamaica with a writer from Time Magazine to do a story on what was then the new and interesting and nobody knew about reggae music. It was something very few people caught on to reggae, outside of the Caribbean and maybe the UK. So, it was one of those culture stories that Time was doing,” Burnett says.

Burnett admits he knew nothing about Marley at the time but he sensed Marley was an incredibly wise man.

“Bob was a peoples’ person and he loved life no matter what colour you were, he loved life. These pictures document his life that was at the height of his career back in 1975,” says photographer Courtney Boyce.

People who attended the gallery’s book signing event were awed by the work. Many of the photographs taken displayed Marley’s daily activities like playing soccer and with his guitar.

“I love the shot of him sleeping on the bus in the middle … It’s the quiet moments I like there are a couple where he has a quiet moment and nothing is going on, he’s just maybe having a chill out before the show or sound check and I think it’s a really nice thing especially because he was so outspoken sometimes the quiet moments are just as good,” Graca says.

Burnett has worked in 80 countries. He has been taking photographs since 1967. He says in jest. “I won’t do the math but that is a very long time.” He had a long contract with Time Magazine, and freelanced as well. He is the co-founder of Contact Press Images in New York City.  American Photo named Burnett “100 Most Important People in Photography.” According to Burnett’s biography on his website, his mother was very happy when he was mentioned as an important photographer.

“Everybody here to some degree has been affected by Bob Marley’s music for reasons only they know. It appeals to people on a number of different levels. And that said, I think we will all take away something different,” Burnett says.