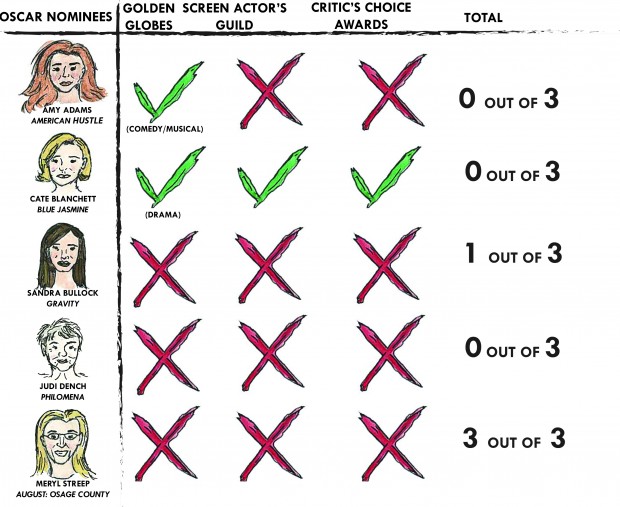 The 86thAcademy Awards, otherwise known as the Oscars, are this Sunday and will be hosted by Ellen Degeneres. The annual show is considered the...

The 86thAcademy Awards are this Sunday and while the annual show is considered the pinnacle of awards season, the race for the trophies begins long before Oscar nominees are announced.

The Golden Globes, Screen Actor’s Guild Awards, and Critic’s Choice Awards are the major shows that precede the Oscars and many feel these presentations  are early indicators  of who gets to take home the Academy’s golden statue Sunday night.

The front-runner for the Best Picture award this year is Steve McQueen’s 12 Years a Slave. After receiving the People’s Choice Award at the 2013 Toronto International Film Festival, the film went on to receive top honours at the 2014 Golden Globes, the BAFTAS (British Academy Film Awards), and the Critic’s Choice Awards.

As you can see on our charts below, the race for Best Actor and Best Actress categories do not appear to be very close either:

Best Actress nominees and their wins so far this season:

Best Actor nominees and their wins so far this season:

Winners of earlier awards shows don’t always come out on top at the Oscars. There have been upsets in the past where unlikely nominees cleaned up at the Academy Awards. In 2010, Kathryn Bigelow’s Hurt Locker won a Best Picture Oscar but after she lost to her ex-husband, James Cameron’s film, Avatar, at the Golden Globes for the same category.

However for bookies who determine the odds between nominees for each category, the awards season is a huge indicator along with box office figures, critical acclaim, and buzz. According to Oddschecker.com, a website that compares betting odds for major events, Cate Blanchett and Matthew McConaughey are most likely to win, just like the charts suggest. 12 Years a Slave  has the highest odds for Best Picture.