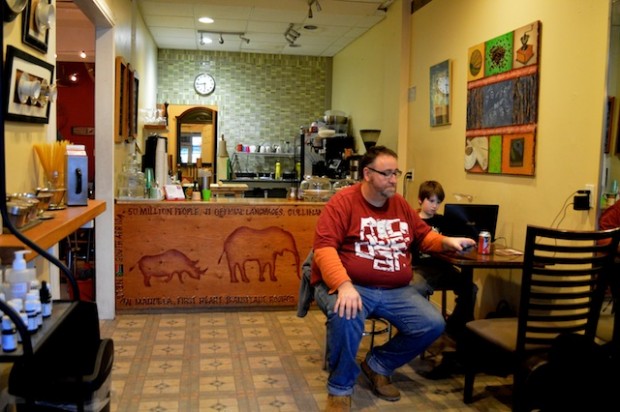 When entering Big Guy’s Little Coffee Shop on Lake Shore in Etobicoke, there is little sense of urgency. The barista chats with a customer...

When entering Big Guy’s Little Coffee Shop on Lake Shore in Etobicoke, there is little sense of urgency.

The barista chats with a customer  in front of the serving counter. A woman with headphones on laughs at something on her computer, and We’re Here for a Good Time by Foreigner is playing on the radio.

The locally made art on the walls look down at the mismatched chairs and tables below. White Christmas lights hang from wall to wall over the couches by the fireplace. The air is tinged with the smell of coffee.

Steve Turner is the owner of Big Guy’s and he often pokes fun at the regulars. Today he singles out a woman who has been sitting in the same spot on her laptop since 11 a.m. It is now 4:30 p.m.

“She’ll buy one coffee and sit here with her headphones on for hours. She spent less than $2 for that coffee,” says Turner.

He smiles and looks at her as he says this, but she is wearing headphones and is seemingly distracted by what is on her laptop.

“We are what we are, and we are different things to different people, but we’ve created a comfortable environment that a core group of people keep coming back to,” says Turner.

The woman in headphones is Louise Saintil, who is using the WIFI to study for her doctorate. She says she’s been going to Big Guy’s for five years.

“I live just right around the block, but I come here because he has great coffee,” says Saintil. “Turner can piss me off sometimes and customer service can be better at other shops but this place has great coffee and great people.”

A man at the other end of the long table jumped into the conversation. His name is Ken Wood, and he moved to Lake Shore Blvd. West less than a year ago.

“This is the best coffee shop in the area, you get a real sense of community. It feels like you’re in your family’s living room,” says Wood.

By request, a barista walks towards the radio and changes the station to classical music.

Big Guy’s Little Coffee Shop is seven years old. They switched locations for two of those years to Roncesvalles and Queen, but Turner says they moved back because business wasn’t working out as well as it was on the Lake Shore. He says an important part of Big Guy’s is the atmosphere, and they’ve found that in the café on the Lake Shore.

Just a couple blocks east another cafe called Sense Appeal will open by the end of the month, and its owners have a different approach to running a café. Steffanie Pinch is the director of communications for Sense Appeal. She says she and the owners are excited to open in the area because the residential community is different from the nature of the downtown coffee shop.

Customers at the downtown Spadina and King location wait in long lines during peak hours and squeeze between other customers to pick their order up from the bar. The new 12,000 square foot space on the Lake Shore will be a café and restaurant but also a hub for the production of the shop’s roasted beans, cured meats, and pastries.

“We make our own cured meats with a method called sous vide, and roast our own beans. That’s why we opened a larger location, to focus on and take care of the back of house quality and craft,” says Pinch.

Pinch says they’re using the new café as an experimental space, adding a lounge area and offering courses on opening a café and how to roast beans. On the Sense Appeal website there is a page that describes the philosophy behind the brand and how scientific research is used to help with the craft of  food and coffee, making better products for customers. Pinch says the owners have recently created a coffee with the flavor of Kraken, a dark spiced rum using reverse distilled alcohol, which means they can add a flavour of liquor but take out the alcohol.

Big Guy’s focus is on community and quality, and Sense Appeal uses science to perfect food and coffee recipes. Each approach works for both cafes, and each have regular returning customers. Turner says he sees potential for the community in the new café.

“Our main customers here will probably stay, and the other café could cater to a different type of clientele,” says Turner.

“The important thing is that a new place on the Lake Shore will get more people walking the sidewalks and actually shopping at the businesses in the area.”

Stephanie graduated with a Bachelor of Journalism from Humber College in 2015.