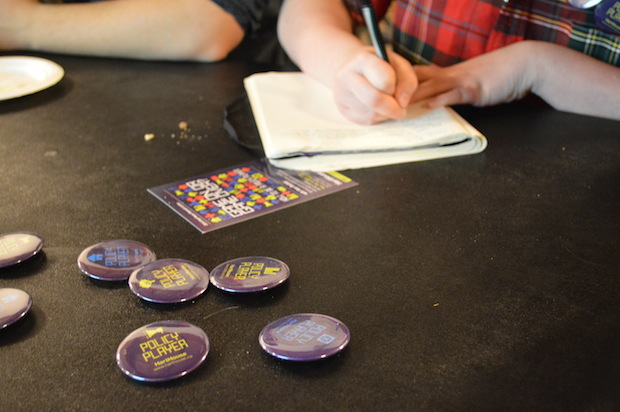 At a lecture and workshop called ‘Dames Making Games: Public Policy Edition’ at Hart House last Thursday, Carver discussed how video games can be used to discuss political issues. The talk was accompanied by a workshop where attendees were instructed to design a video game that tackled a specific political issue of their choice.

Emma Arppe-Roberston, executive assistant to the Warden at Hart House, participated in the workshop and said the most interesting challenge in making a game is boiling down ideas into an interactive and playable format.

Arppe-Robertson helped design a game during the workshop based on student union politics where social resources were represented with playing cards that were traded back in forth like tug-of-war.

“It’s putting our variables together in a way that was playable,” says Arppe-Robertson about the challenge of simplifying the game’s mechanics. “You can’t have 18 piles of cards.”

Topics such as Canadian nationalism, corruption and controversy in the Olympics, and political compromise were discussed among the participants in an attempt to create experiences that tackled the issues in meaningful ways.

Carver co-founded Dames Making Games in order to encourage women to make games and combat the less-than-hospitable environment they face in the industry.

“I’ve met a lot of women who are very passionate about games and care a lot about games culture, but don’t necessarily feel that it’s for them because their perspectives aren’t part of games the way we think of them,” says Carver.

But that doesn’t stop the women who do take up game development from enjoying what it has to give.

“I get to build things for people to use, and make experiences for them to live through. It’s been amazingly fun working in the games field,” she says. “Even when it’s challenging, I’ve built up an awesome group of talented and engaging people to be around, which helps a lot.”