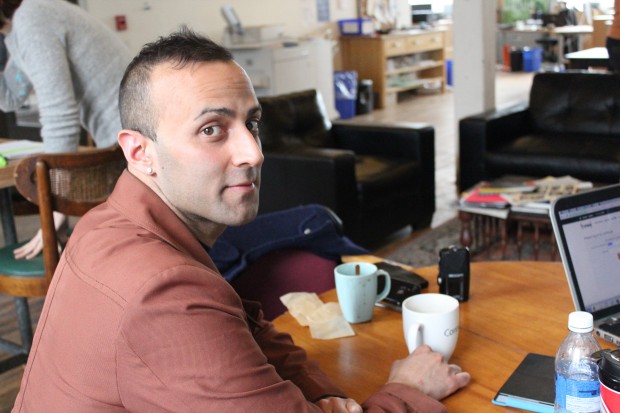 Mayoral candidate differentiates himself from Ford

Robb Johannes doesn’t like using the word ‘fringe’ to describe his candidacy for mayor of Toronto. But as a lesser-known candidate, he recognizes that...

(Robb Johannes, a lesser known mayoral candidate, hopes to get reach voters with his Robb Not Ford campaign and unique platform.-PHOTO by Joyita Sengupta)

Robb Johannes doesn’t like using the word ‘fringe’ to describe his candidacy for mayor of Toronto. But as a lesser-known candidate, he recognizes that he needs to work that much harder to reach voters, which is why the “Robb Not Ford” campaign came about.

“This campaign is based on acknowledging that the mayor is only one vote in a council,” said Johannes. “Yes, sometimes they do have additional responsibilities but they have to do with your ability to listen and facilitate everybody, to not divide communities.”

Donning black nail polish, Johannes is the lead singer of Paint, an indie rock band. He was one of the first mayoral candidates to register. He is a “recent graduate” to the 30s and has spent most of his time growing up moving between Vancouver and Toronto before permanently settling down in the Danforth area four years ago. He hoped to differentiate himself from the current administration, thus adopting the campaign slogan, “Robb Not Ford, the extra ‘B’ stands for better.”

It has been a challenge for Johannes and his team to acquire media attention and campaign resources, given their low-profile among other mayoral candidates.

He says the reason he isn’t running for council instead is because he believes his councillor, Paula Fletcher, is doing a great job.

Johannes worked for a number of non-profit initiatives in Vancouver, including the Vancouver Area Network of Drug Users (VANDU). He believes that he has the professional and education background to fill the position but believes his strength might be his ability to relate to those that feel disenfranchised.

“I’m also in the position of a lot of people that are under 35 or under 40, who are struggling to get by,” Johannes said.

“I kind of do whatever I can to pay the bills. Toronto is a beautiful city but it is a difficult city to stay afloat in.”

“I think people can relate to the fact that we’re not big government and that we’re new to the game,” Cummings said.

While Johannes may not have had the chance to go head to head with major candidates at the most recent debates last week at CityTV and Ryerson University, he was named the winner of a student-run debate held at University of Toronto Scarborough by the Grid T.O. columnist, Stephen Spencer Davis.

“Johannes was articulate, not only in comparison to Ford, but also next to his fellow long-shot candidates on the forum,” wrote Davis.

Johannes platform places emphasis on arts and culture funding, support for students and young people, as well as a proposal to extend last call hours for Toronto bars.

“I don’t think there’s anything really all that radical in my campaign. It’s nothing that’s not already being done in terms of Canadian federal law and other parts of the world,” Johannes said. “I think there’s a lot that we can learn from elsewhere.”

Johannes is continuing to look for opportunities for public exposure before the mayoral elections in October. Next up, he plans on attending Turnout Toronto, a civic engagement fair in Regent Park on April 10th.