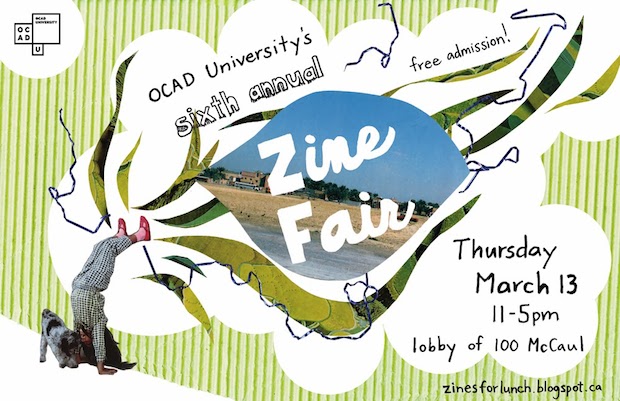 Toronto zinesters show off their work

The lobby of Toronto's OCAD University was packed on Thursday March 13 with young artists sitting at folding tables, all selling unique small...

The lobby of Toronto’s OCAD University was packed on Thursday March  13 with young artists sitting at folding tables, all selling unique small booklets called zines. This was the school’s sixth annual Zine Fair. A celebration of the self-published small booklets, created by emerging artists.

Some booklets were full essays, while others were entirely graphic in nature.

Canada was a recurring theme at the event. Claire Wright, a third-year print-making student made multiple zines, one was titled Canadian Beavers and was created as an assignment. She describes it as “what you would expect.” It is a graphic zine featuring drawings of vaginas, and the cover features a felt triangle pointing down, as a coy reference to the content within. Her other zine is mixed media called Self Hate Club that ten of her friends submitted to. She describes it as “a collection of work about how they hate themselves.”

While the same themes seem to pop up in works by multiple artists, how they are presented and interpreted is entirely different.

Stefanie Chow is also a third-year printmaking student, who was selling a single zine along with a variety of crafts. Her zine was done for the same Canadian assignment as Wright’s but “basically narrating popular stereotypes about Canada and things we have like beavers, maple syrup and things like that.” She  says she chose to express this theme by drawing these elements out of a single red line that loops from page to page and gets the point across in a very effective, but minimalist approach. She chose this style because of how well it allowed her to tell the story.

Not all of these zines were done for assignments, some are done for personal reasons.  Marley Allen-Ash is third-year illustration student, who did two zines. There are two images that seem to grab in her work. One is a brain with a humid, damp, forest complete with mushrooms growing out the back of it. The other is a mouth open, with the tongue extended and shards of tooth sitting on it.

“Both of them are mostly based on my anxiety really…just about uncomfortable feelings and this one is about the stress dreams that I have…. I have a repeating dream where I break off my teeth and grinding my teeth…I think a lot of people have that dream,” Allen-Ash says,

With the most costly of these zines going for $5, these artists and writers offer a very inexpensive glimpse into their creative souls.