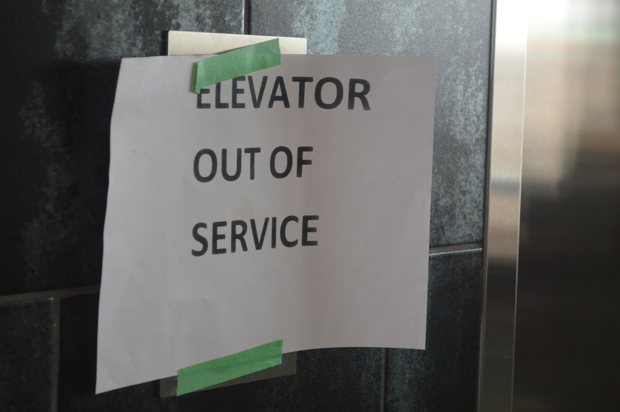 L-Building elevators down for six hours

It is April Fools day, but the broken elevator in the L Building at Humber’s Lakeshore Campus is no joke. Students and faculty arrived...

It may have been April Fool’s day, but the out-of-order elevators in the L Building at Humber’s Lakeshore Campus were not a joke.

Students, staff, and faculty arrived for their morning classes to find themselves faced with having to climb up to three flights of stairs because both of the building’s elevators were out of service due to a problem with the third floor door track.

Manager of Maintenance and Operations Scott Skrinar says the repairs were done by 1:30 p.m. and the elevators were working by 2 p.m.

The elevators were out of service almost six  hours which meant access to floors beyond the ground level had to be made using the stairwells.

“That’s the reason we have two elevators,” says Buote. “When we designed the building, we designed it so there would always be one working.”

Wood says the even though both elevators were out until 2 p.m. Tuesday, the availability of the elevators has been getting better.

Wood provided Skedline with a service report from Otis. It reported 100 per cent  availability, 24 hours a day, seven days a week between April  2013 and March 2014. However, Wood himself contradicts the report.

“We have had some trouble with those elevators, but not recently. Definitely six months ago they were a problem, but not now,” says Wood.