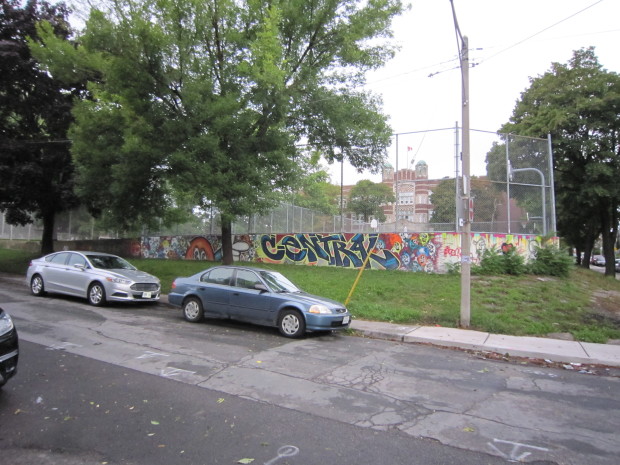 Transit26
Toronto Police Service and the Toronto District School Board are teaming up in a road safety blitz for students and motorists. The Back to...

Central Commerce Collegiate on Shaw St. is one of the many busy public schools dealing with road safety concerns. (PHOTO: Alex Karageorgos)

Toronto Police Service and the Toronto District School Board are teaming up in a road safety blitz for students and motorists.

The Back to School – Back to Basics, Remember Road Safety initiative runs through the first two weeks of school to promote safe driving habits. Toronto Police Traffic Services Const. Clint Stibbe says the joint project is the first of its kind in the city.

“Habitually, speeding is our largest offence,” Stibbe says. “Any time speed limits are imposed, it is quite common for somebody to break those rules.”

“There have been on-going concerns the school board has been working on with both the city and the police,” says TDSB Chair and school trustee, Mari Rutka.

Coupled with speed, stopping is another concern. Violet Ling, 14, was killed while crossing the street near C.W. Jefferys CI on the first day of school last year when a disposal truck ran a stop sign and struck the Grade 10 honour student.

“If a school zone is located within the boundaries of a community safety zone as described in the Highway Traffic Act, then the fine for failing to obey a stop sign increases and is doubled,” says Ministry of Transportation spokesperson Bob Nichols.

On top of this, drivers travelling through public school streets should be aware of school buses dropping off and picking up students. If convicted, the first offence for not stopping while a school bus has its four-ways on ranges from $400 to $2,000 and six demerit points.

“Hopefully from this project there will be improvements in the safety for all students,” Rutka says. “The more support the board can get from the police on that, the better.”