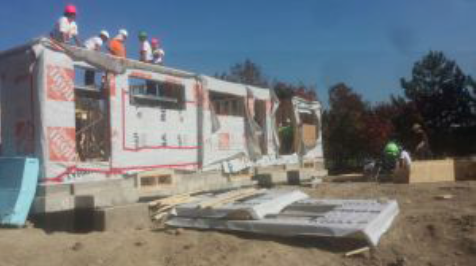 The Women Build 2014 project run by Habitat for Humanity aims to build 15 town houses in Scarborough and another 18 homes in Brampton...

Assembling the roof and walls of a townhouse
(PHOTO: Emily Singh)

Volunteers putting together the framework for the
homes. (PHOTO: Emily Singh)

The Women Build 2014 project run by Habitat for Humanity aims to build 15 town houses in Scarborough and another 18 homes in Brampton for low-income families.

Suited up in their steel-toed boots and hard hats , the women came together at the Torbram Road and Clark Boulevard site in Brampton to build, each with their own unique story as to why they were here.

“My mother passed away on Boxing Day, and it is something that we talked about doing together so I’m here today to honour my mom. Whether you’re a woman or a man it is important to give back to your community no matter what gender you are, it is really a great thing to do,” says volunteer Glemena Bettencourt.

The first day of the Brampton portion of the build took place on Sept. 23, and is the very first Women Build to take place in the city.  There are plans to expand into York Region next year.

“The main goal of a women’s only build is to empower them, get them together learning, having fun and taking pride in building a home,” says Nicole Buckley, marketing and communications coordinator at Habitat for Humanity. “It is about encouraging women to volunteer in a field that is mostly male-dominated.”

However, Buckley says before a family can receive one of these homes they must go through a rigorous process. Contrary to popular belief, these homes are not free of cost. Families must be able to prove that they can afford a mortgage then process through to the family services department of the organization.

“I drove past the site and saw the work they were doing there. It’s something that you never really see in Brampton and I hope that it continues to different parts,” says Brampton resident Ricky Harricharan.

So far the organization has raised 88 per cent of $1-million goal.