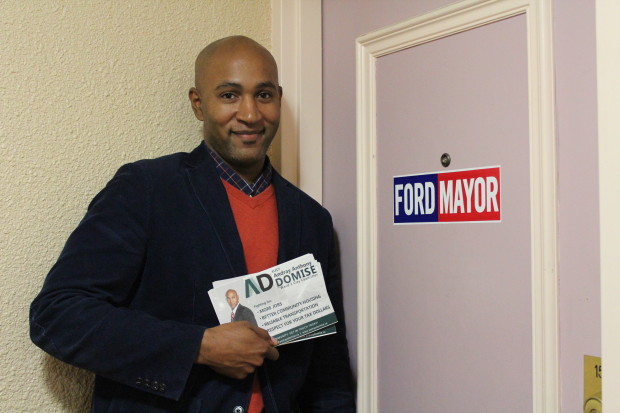 Andray Domise doesn’t miss a beat, and launches into the same speech he’s delivered over and over already this day.

“That’s okay, I have nothing against him personally but I think this community can do better,” says Domise. Canvassing a condo building at Almer Court in Rexdale, Domise had already run into a small handful of Ford supporters at this point.

“You know, he supports our community,” says the woman at the door. “Our people.”

Domise seems to pick up that she’s referring to the Caribbean community. Domise himself is of Jamaican descent. The two of them quip about where in Jamaica their families are from before they get back on the topic of Ford.

“On one hand, they’ll come to our dances and whine up on people at Caribana and eat the food and try to talk the language,” Domise says to the woman, her door more open than it was before. “But on the other hand when it’s time at city council to offer some support in this community, they always say no.”

Domise is running for council in Ward 2, Etobicoke North, in the upcoming Toronto municipal election. The 34-year-old financial planner grew up in Rexdale and left in his late teens. He decided to move back and run for council, feeling compelled to help his community after seeing a lack of progress and development in the area. He feels that this part of the city has largely been ignored by elected officials with businesses often skipping past Etobicoke and opening shop in the rapidly growing city of Mississsauga.

Now, like never before, all eyes are on Ward 2. Before becoming internationally known through scandalous newspaper headlines and talk show appearances, Rob Ford started his political career as a councillor for the suburban ward and held the seat for 10 years before running for mayor. His brother, Doug, was elected to council and represented the ward for the following four years.

In a dramatic turn of events on September 12, Rob Ford dropped out of the race for re-election after being diagnosed with a rare form of cancer, opting to run for councillor of his old ward instead, and displacing his nephew, Michael Ford, in the process.

Polls taken the day Rob Ford dropped out of the mayoral race placed him at a comfortable lead in the race for Ward 2. Mainstreet Technologies had Rob Ford was polling at 49%. Forum Research did a similar poll and Rob Ford was at 59%. In both cases, Domise was the only other candidate named and was about 30 points behind.

Domise says he doesn’t ask the many Ford supporters he meets why they plan to vote the way they do. But not everyone is a supporter.

“Is your last name Ford?” a woman asked, passing by Domise in the Almer Court condo on her way to her door.

“No, it’s not actually. My name is Andray Domise.”

“Ha! Perfect! You’ve got my vote,” she said, chuckling.

Support for Domise is growing. His campaign received $10 thousand in donations between 1 pm and 9:30 pm the day Rob Ford entered the Ward 2 race.

But’s the anti-Ford camp has 13 other options including one that has been gaining traction among residents and news outlets alike.

A tall, lanky boy in his teens opened the door. Domise introduced himself the way he normally does and asked him if he plans to vote.

“No I’m not old enough but I’m volunteering for another candidate. Munira Abukar.”

22-year-old Abukar graduated from Ryerson University last spring with a degree in Criminology and has been a member of the Toronto Community Housing board for four years. She lives in the Scarlett and Lawrence area and says she hopes to bring something new to the table.

“My age, my gender, my values and beliefs reflect the physical diversity of Toronto. We don’t all look the same and we don’t all have the same ideas,” says Abukar in a phone interview from her campaign office. “We can begin to fix problems in the city when we bring people that think differently and think outside the box.”

She says that her outlook on the campaign hasn’t changed since Rob Ford has taken Michael Ford’s place in the race.

“A Ford is a Ford. Rob has had an interesting year with the media but other than that the last four years that he’s been mayor and while Doug has been councillor, Etobicoke hasn’t seen any changes,” Abukar says. “We’re still one of the poorest wards in the city.”

As polls currently stand, Domise is the closest challenger to the council, 30 points away from Rob Ford. Munira’s place in the polls is not known publicly.

Quitto Maggi of Mainstreet Technologies says from personal experience, Domise still has a chance of closing that gap.

“In 2010 I managed a campaign in Barrie named Jeff Lehman for was running for Mayor and was in a big field between the incumbent mayor and the former MPP,” says Maggi. “We didn’t crack double digits until August. We were at fourth place with 11% as of September 1st and we ended up running away with 49% of the vote.”

Increasing transit accessibility is a key goal for both Domise and Abukar.

While canvassing, Domise often shares how difficult it is for seniors that attend his church to attend congregations on Sunday when transit is very limited. Abukar talks about how it would take over an hour and a half to get to Ryerson because of inconsistent bus service.

Both Domise and Abukar stress the need for jobs in the area. While canvassing, Domise tells residents he hopes to help expand the Woodbine Racetrack into a larger entertainment complex to revitalize that area. Abukar aims to work with local businesses and schools to increase the number of paid internship opportunities available in the area.

With ideas and goals that clearly overlap, the concern may be whether or not the vote will split. Maggi, based on the numbers he has at Mainstreet Technologies, thinks Domise still has the advantage.

“The people in the ‘not-Rob Ford’ vote that total 41-42 percent, instead of a lot of those other candidates that are running, nothing against them. But Andray has a chance to pick up votes from them by saying here’s the only guy who has a chance,” says Maggi.

Advanced polls have since closed and the election will be held October 27th.