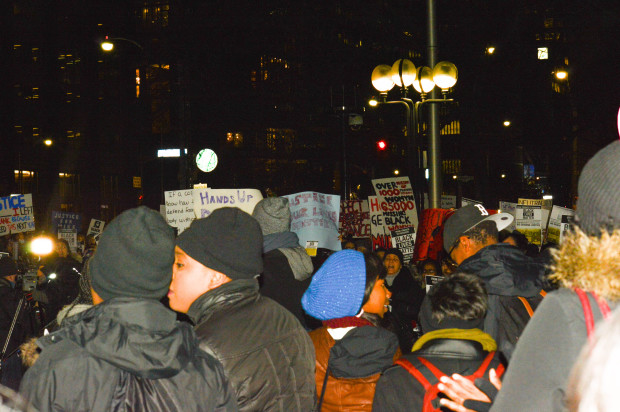 Crime30
There was a sea of candlelight, people dressed in black, signs of support and chants of solidarity against racism and police brutality in the...

There was a sea of candlelight, people dressed in black, signs of support and chants of solidarity against racism and police brutality in the chilly fall weather Tuesday night in downtown Toronto.

Around 2,000 people participated in a protest against police brutality on African-Americans on Tuesday at the US consulate on University Avenue after the decision of the Ferguson, MO grand jury to not indict officer Darren Wilson, who shot and killed an unarmed black teen in August. 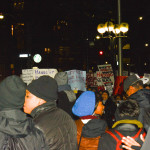 Protesters in Toronto gather outside the U.S. Consulate on University Avenue and Queen Street to protest the Ferguson, MO grand jury’s decision to not indict police officer Darren Wilson. 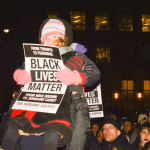 About 2,000 people wave signs or chant to protest racial profiling by police officers after Michael Brown, an 18 year old was fatally shot by a white police officer in Ferguson, MO in August. 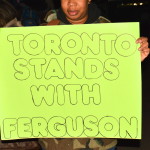 A protester holds a sign that shows support for and solidarity with the protesters of Ferguson. 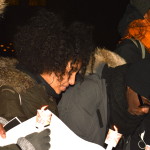 Protesters light candles to grieve the death of Michael Brown. 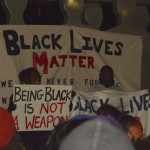 Tanya Grant raises the discussion about police brutality in Toronto and speaks about her cousin Jermaine Carby who was shot and killed by a police officer in Brampton in October. 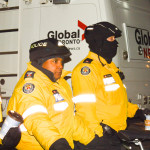 Toronto police officers stand on guard outside the U.S. Consulate to ensure protests remain peaceful after protests in Ferguson, MO got violent.

Ruth Bannerman was holding two signs. One read, “Our skin is not a target,” and another read, “Toronto stands with Ferguson.”

“We are not disposable. We are going to continue to have black skin so there is really you can do with it,” she said. “If we are supporting the Americans with our troops, this is something else we should support them with. We stand with them.”

The anxiously awaited announcement on the fate of Wilson came on Monday night, causing protests to erupt across North America, including violent riots in Ferguson.

The grand jury’s decision to not indict the six-year police veteran, for possibly involuntary manslaughter or first-degree murder of 18-year old Michael Brown, means the potential for future charges via the U.S. Department of Justice are less likely.

Tanya Grant was there to protest the decision of the grand jury in Ferguson, but also wanted to make the discussion larger, about police brutality towards African Americans everywhere, including Canada.

She spoke to the crowd about how her cousin, Jermaine Carby, was killed by a police officer in Brampton last month and said she wanted more transparency.

“We know nothing about what happened,” she said. “I want to know the name of the officer that shot my cousin. We still don’t know why my cousin was pulled over when they shot him. We want answers.”

Samuel Getachew was holding a lit candle and said he was there to remember a lost life, and to him it felt like attending a funeral.

“Michael’s life was a reminder of the kind of life that too many of us have lived,” he said. “If you have black skin like I do, we have all been victims of police brutality. Michael Brown is one of too many.”

The protest, organized on Facebook, made the controversial urge for white and non-black people to stand toward the back of the crowd to refrain from taking up space, something they did. This sparked an online debate.

Many Facebook users that commented on the page that organized the event felt that protest should be about solidarity against racism, rather than what they percieved to be segregation.

Facebook user Ellie Spiers posted, “How pathetic that you all want to protest against discrimination and racism and yet you are doing the same thing. Typical.”

Many well known Toronto news sources framed their stories the next day around this controversy.

Tamar Elise, who took part in the protest as an active listener, said the fact that white people are more concerned with the request to physically give space to black people in the midst of grieving the loss of yet another person to racial violence than they are about the systemic acts of police brutality against blacks indicates that we have a long way to go.

Elise said, “When the focus shifts away from the solidarity, passion, and all of the incredible political action that occurred to fixate instead on white voices arguing about the unfairness of being asked to stand towards the margins it becomes obvious whose lives are prioritized. That in itself is why it has been so important to emphasize that black lives do matter.”

Brown’s family has expressed their pain and disappointment and has urged peaceful protests.

“We are profoundly disappointed that the killer of our child will not face the consequence of his actions,” they said in a statement. “While we understand that many others share our pain, we ask that you channel your frustration in ways that will make positive change.”

Bannerman said she hoped their protests would spark a change in the law enforcement systems all over North America.

“The government officials need to realize there is something wrong with our system, with racial profiling, police carding, and they need to change it,” she said. “We can only make so much noise. Hopefully they hear us. Hopefully they do something about it.”