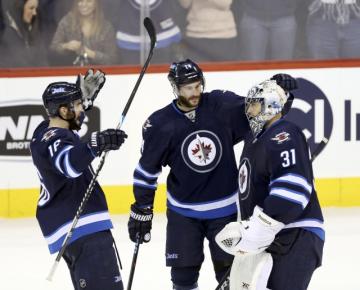 NHL19
Photo courtesy of Reuters PHOENIX, ARIZONA (REUTERS) – The Arizona Coyotes traveled north of the border to take on the Winnipeg Jets, hoping to...

The Arizona Coyotes traveled north of the border to take on the Winnipeg Jets, hoping to snap their 4-game losing streak.

The Jets scored first, on a goal from Brian Little just four minutes into the game after receiving a crisp pass from captain Andrew Ladd. Despite that Little has three goals and three assists in his past six games, the Coyotes responded on their first shot of the game at 7:36. Defenseman, Ekman-Larsson took a pass from Shane Doan to beat Jets goalie Ondzej Pavelec for his team-leading 12th goal.

A miscommunication between Smith and Coyotes defenseman Connor Murphy helped Winnipeg take back its lead just over one minute into the second period. Smith’s attempt to pass the puck from behind the net to Murphy failed and allowed Frolik to tap his tenth goal into the empty net.

Byfuglien put the Jets up 3-1 with ten minutes left in the game; when he converted a 3-on-1 rush for his 12th goal of the season. However, Coyotes coach Dave Tippett has been stressing the need for his players to go to the net, and the message paid off in the Coyotes’ third-period comeback.

Korpikoski moved the Coyotes back to within one goal, late in the third period by scoring his fourth of the season and Tobias Rieder tied the game with three and half minutes left in regulation; when he tipped a shot past Pavelec for his sixth goal.

Winnipeg center Bryan Little scored the only goal in the shootout to lift the Jets to a 4-3 victory over the Arizona Coyotes by firing a shot high over goalie Mike Smith’s glove to give the Jets two points on a night when the result really should not have been in doubt. Winnipeg (25-14-8) are tied with the Chicago Blackhawks for fourth spot in the conference.