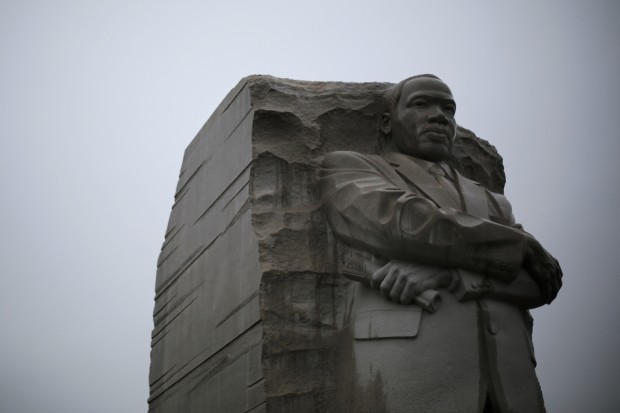 Tributes to civil rights leader Martin Luther King Jr. were held around the United States on Monday as protests over the treatment of minorities by law enforcement rolled on across the country.
Observers of Martin Luther King Jr. Day have linked the federal holiday to a rallying cry in recent months during demonstrations over police brutality: “Black lives matter.”

In a pre-dawn rally in Oakland, California on Monday, about 40 people converged on the home of Mayor Libby Schaaf, calling for harsher punishment of police who use violence against civilians. They chalked outlines of bodies on the tree-lined street, played recordings of King’s speeches and projected an image of the slain civil rights leader with the words “Black lives matter,” on the mayor’s garage door.

Other protests were planned in major cities including Dallas and New York. The family of Eric Garner lay a wreath on the Brooklyn Street where two uniformed officers were ambushed in December by a gunman claiming to avenge Garner’s death.

Decisions by grand juries not to indict officers in the deaths of Garner and Michael Brown, an unarmed black man shot dead by a white police officer in Ferguson, Missouri, touched off months of protests across the country.

The sentiment resounded even at traditional events honoring King that were under way elsewhere, including a King commemoration at the Ebenezer Baptist Church in Atlanta, where King once preached.
Across the country in northern California, tickets sold out for the final run on Monday of the Freedom Train. The last of more than two dozen official train services launched 30 years ago by Coretta Scott King in honor of her husband, according to the Dr. Martin Luther King, Jr Association of Santa Clara Valley.