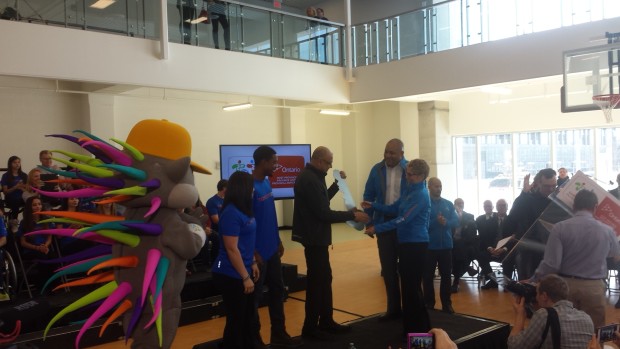 Athletes will be saying “home sweet home” to the nearly finished CIBC Pan Am / Parapan Am Athletes’ Village, officially handed over by Premier Kathleen Wynne and Mayor John Tory to the Toronto 2015 Committee last Friday.

The Athlete’s Village is the biggest building project in preparation for the July 10th and August 7th kick off dates for the Pan Am and Parapan Am Games. Executive Vice President of Operations, Sport and Venue Management Allen Vansen said legacy has been an integral building block from bid to construction to handover and continues the theme of providing long-term use with all Pan Am and Parapan Am facilities.

“In 2010 we started working with the organizing committee to bring our plans to life in terms of what’s needed for the Games but also marrying requirements with what’s most important with a community and the legacy for eastern Toronto for decades to come,” Vansen explained.

Once the Games wrap up the Athletes’ Village will reopen in the spring of 2016 to offer affordable housing units and a George Brown College residence. Future tenants will also have access to an 82,000 square foot health and fitness centre, which will serve as the athletes’ training and warm up facility. “The Cooper Koo YMCA will take over the legacy of the building after the Pan Am Games,” said Lisa Pires, Public Relations Specialist with YMCA GTA.

Vansen also said that Game-Time needs will go above and beyond what previous Athletes’ Villages have offered in past, such as retail, recreational and round the clock meal services. Vansen said athletes will be well connected with a social media hub in the Athlete’s Lounge outfitted with laptops. But Vansen added that the TO2015 Committee will be going against the grain by making each residential suite WiFi accessible, something that Vansen says was not offered at the Vancouver Winter Games or the Pan Am’s in Guadalajara, Mexico. “Having internet connectivity in each suite typically hasn’t been the case because you want them to get out of the room and socialize,” Vansen clarified.

Vansen said athletes have shown a positive response to the increased connectivity. “It alleviates pressure in terms of connecting and the devices they’d have to bring.” Jenna Caira, pitcher for Team Canada Softball, said that the team was supplied with internet devices for the Guadalajara Games in 2011. “Internet wasn’t something easily accessible,” said Caira. “The team gave us cell phones with data and texting to stay in touch family and organize team meetings.”

Caira said she believes readily available internet won’t take away from the socializing aspect of the Games, and could improve it. “It’s cool to hear from the athlete’s perspective, a personal interaction that we may not have been able to get 10-20 years earlier,” Caira explained.

Look for possible #MoveInDay tweets and posts on Canada Day when the athletes officially move into the Village.