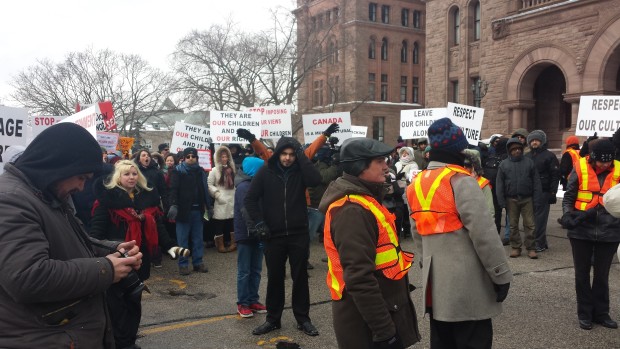 Protesters clashed Tuesday in front of the Ontario legislature at Queen’s Park over new sex education programming proposed for September 2015 in Ontario public...

Protesters clashed Tuesday in front of the Ontario legislature at Queen’s Park over new sex education programming proposed for September 2015 in Ontario public schools. A group of about 300 hundred and a much smaller group of about 20 protested against and for the changes respectively.

Ben Levin, former deputy minister of education is currently facing child pornography charges. Those against the curriculum voiced concerns Tuesday at the protest that Levin was involved in the curriculum development while he was still minister. Sandals told the Toronto Sun earlier this month that “I can guarantee you that Ben Levin was not in any way directly involved in developing the curriculum.” Parts of the new plans, such as the teaching of grade one students to properly identify their body parts and the introduction to the concept of consent, were addressed by Sandals at a press conference earlier this month, where she stated that “What the police tell us, what Children’s Aid tells us, what Public Health tells us, is that children need to know how to communicate the parts of their body in the event that, God help us, they’re being abused.” On Tuesday Karyn Pickles of the Huffington Post wrote on the Post’s blog, that “pedophiles, child pornographers, and child molesters . . . are the ones who would benefit MOST from the old curriculum remaining in place.”

Anwaar, a parent who did not want to give Skedline his surname, said that the counter-protester’s views should not be considered valid in this discussion because “they are a minority” and that he believes that they “are touching our children.” While a counter protester named Jed Mimnagh-Kennific was describing their own experience of being statutorily raped, Anwaar shouted over top of their words to drown them out. Anwaar told Skedline that “sex is the only thing in the world for which you need not have any education.”

Mimnagh-Kennific said over a megaphone that “The last time I was spoken to in an educational setting about sex . . . the word consent was not mentioned once . . . The first time someone had sex with me [I was] 14. They were much older. I did not know that I was allowed to say no . . . We let you guys **** up our childhoods. For that we can forgive you, but we cannot and will not let you do the same to our children.” Anwaar was not the only one trying to drown out their story about the shame they felt at this time in her life. The opposition was chanting “SHAME! SHAME! SHAME! SHAME!” overtop of their speech.

Other protesters expressed concerns that parents weren’t consulted enough in the process of the legislation. Stephen Chan, an accountant, shared his views with Skedline. He said that “In the consultation of 4,000 people, they were hand picked.” The 4,000 people Chan is referring to are the chairs of parent councils who according to Pickles’ Post blog were democratically elected, not hand picked. Chan said he is not however, wholly against sex education. He said that sex education “is good, but it has to be a good program.”

Kim Fry, a teacher in the Toronto Disctrict School Board and parent to a 12 year-old girl, was part of the counter-protest, and she shared her thoughts with Skedline. Fry saw the protest on television, and saw people being interviewed who “clearly had not read the curriculum document and had no idea what they were talking about.” She spoke on the curriculum’s inclusion of the LGBT community in the document. “People’s homophobia and transphobia is on display. Their misogyny and desire to maintain patriarchal norms is just all there.” She said, gesturing towards the mob of hundreds shouting the small counter-protest down. “Some families have two moms or two dads and people are offended by that, even though that actually exists across Ontario and not just in big cities like Toronto . . . Not only do their kids need to know that their family structure is good and healthy and normal, but their fellow classmates need to know that and to respect all the different kinds of families that we have.” Same-sex marriage has been legal in Canada for 10 years and LGBT Canadians have been protected under the Canadian Charter of Rights and Freedoms since 1985.

On the idea of teaching consent (which some members of the larger protest had signs specifically condemning) Fry said that “I’m a Grade 1 and 2 teacher. I teach my kids about consent in an age appropriate way. I talk to them about how they need to ask if then can give a hug or hold someone’s hand. If someone says ‘No. I don’t want you to hug me’ even if it’s their best friend, they need to respect that. Obviously, we build on that as students get older and their sexuality becomes more complex.”

The protest against the curriculum changes was organized by former TDSB Trustee Sam Sotiropoulos who is best known for tweets deemed derogatory by students, teachers and community members alike that he made while still in power in which he said that he reserves the right to believe that transgender people are mentally ill. He lost his bid for re-election in October to Manna Wong by about 2000 votes. Sotiropoulos still refers to himself as a trustee on his twitter page despite no longer being one. The counter protest was organized by Toronto activist Davina Hader.