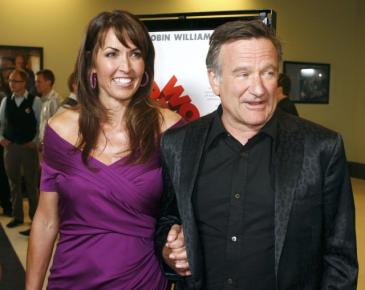 SAN FRANCISCO (REUTERS) – Susan Schneider Williams, the widow of comic legend Robin Williams and their three adult children are locked in a pitched...

SAN FRANCISCO (REUTERS) – Susan Schneider Williams, the widow of comic legend Robin Williams and their three adult children are locked in a pitched battle over his estate months after his death.

After committing suicide in August, the conflict centers on items the groundbreaking comedian left behind, from figurines, bicycles, watches and clothing.

In a petition filed in Superior Court in San Francisco on December 19, Susan Williams said some property was removed from the house without her permission and that she became frightened of the co-trustees invading her home.

The filing said that most of the items inside of Williams’ other home belonged to his children, Zachary, Zelda, and Cody. However, based on a separate trust, certain personal items did not.

Robin Williams’ children then responded in a filing on January 21, accusing that Susan Williams was deliberately attempting to obscure the language of the documents to secure more of the estate for herself.

The spokesman for the children, Allan Mayer told the New York Times that Williams’ children had not taken anything from the home since the actor’s death.