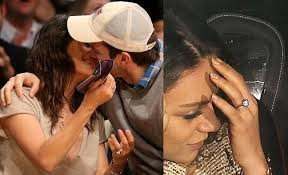 Mila and Ashton have tied the knot

Actress Mila Kunis has finally admitted she has tied the knot to the Two and A Half Men star Ashton Kutcher. According to the...

Actress Mila Kunis has finally admitted she has tied the knot to the Two and A Half Men star Ashton Kutcher. According to the Daily Mail press release, Mila flashed her wedding ring in front of the audience at James Corden’s new chat show called The Late Late show.

Throughout the show Kunis was very coy and kept replying with a “maybe” when Corden asked her several times if she was married. He was not the first television host to ask the question, “Are you and Ashton married?”

According to the Hollywood Life press release, on the Ellen DeGeneres show Ellen questioned Kunis about a Facebook photo which showed “the Kutchers” written in the sand. She and Kutcher have a young daughter named Wyatt Isabelle who was born last October. Wyatt has the last name Kutcher, and Kunis said the photo could be implying a plural phrase as a family but not engagement.

Kunis has avoided the question many times, and with host Corden on The Late Late show she couldn’t play coy anymore.