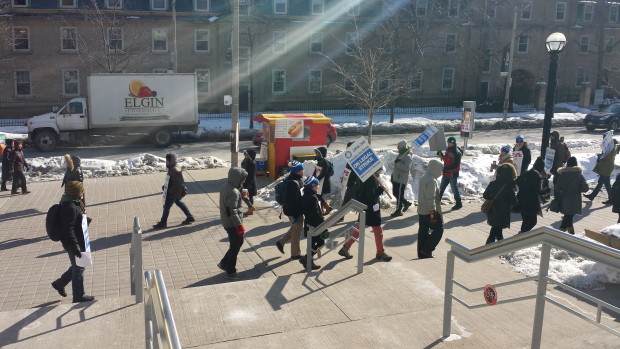 Striking U of T doctoral students rally for living wages

by Aeryn Pfaff Striking University of Toronto teaching and lab assistants held rallies across the downtown campus today. It’s a week into the strike...

It’s a week into the strike that started last Friday when the Canadian Union of Public Employees local 3902 rejected a proposed deal that would continue a seven year freeze on minimum support for the doctoral students. The students are ensured a minimum of $15,000 a year, which they say places them at 35 per cent under the poverty line.

Protesters through out the university today chanted lines such as “What’s outrageous? Poverty wages. What’s disgusting? Union busting.” brandishing signs and singing songs such as Daft Punk’s Get Lucky, replacing the chorus to “We strike all day to get funding.”

Ryan Culpepper of the CUPE 3902 Unit 1 spoke to Skedline to outline some of the strike issues.

“There’s no shortage of funds coming into the university. Tuition goes up every year. We know that. We’re tuition paying members of this unit. The University of Toronto has posted surpluses in the last few years in the hundreds of millions,” he said.

On where that money goes, Culpepper said “we’ve seen administrative costs . . . I’m talking about deans, vice-presidents, vice-provosts, we’ve seen that structure inside the university absolutely grow . . . and we’ve seen the amount that goes towards teaching rapidly decrease. Decade by decade and year after year. It’s at historic lows now.”

CUPE 3902’s literature asks concerned community members to call Provost Cheryl Regehr to demand the university bargain to support education workers, but the provost has put out her own press release on the university’s website that contradicts the protesters’ position.

Dan Brielmaier, also of CUPE 3902 clarified those claims, saying “the funding package covers tuition. For me I’m an international student so my tuition would be around $20,000. No one is making money in the 40 or even 30,000s.”

Culpepper had some words on where the university’s surplus of funding should go. He said the University of Toronto is not about “administration. It’s not about fancy facilities or the Pan Am games or bamboo gardens; it’s about research and teaching and we’re demanding that a meaningful part of the university’s budget go to pay the people who are doing the teaching.”