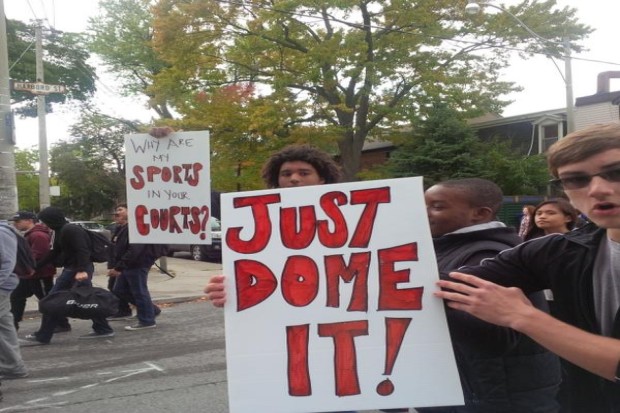 TDSB4
A verbal agreement has been reached surrounding the fate of a field and dome at Central Technical School that may finally put an end to...

A verbal agreement has been reached surrounding the fate of a field and dome at Central Technical School that may finally put an end to a year-and-a-half long debate.

The field, located at Bathurst and Harbord Sts., will receive an artificial turf field and dome for the winter months, once the Ontario Municipal Board signs off on the deal. Mediation talks in January helped resolve struggles between no fewer than seven interest groups that had left students stranded with no field for gym classes and sports teams.

The Toronto District School Board set the original plan in motion by selecting Central Tech as one of six schools to be part of their championship field program. The prospect of a state-of-the-art field and seasonal dome looked promising for the students, especially after their football team took home the city title in November 2013 – the same month their green space was officially closed down.

Central Technical School has been without a home field for nearly a year-and-a-half. (PHOTO: Alex Karageorgos)

Soil contamination and niggling municipal bylaws regarding the closure were beyond the students’ control, but these issues, coupled with community backlash, stopped the plan from moving forward.

“From members of the community, there seemed to be a deep rift between the values of the students, and the vocal minority,” says Central Tech student council vice-president, Raymond Dang.

Whether it was health risks associated with artificial turf or the dome height blocking Central Tech’s heritage building, the concerns listed by the HVRA and PARA gained traction. They were also concerned that the field would be built in a public-private partnership. At one point last March, both groups tallied close to 1,000 signatures on a petition to stop the TDSB plan.

While the TDSB managed similar public-private partnerships at other high schools in the past with minimal obstructions, including Monarch Park and Lakeshore Collegiate Institute, these members believed it would adversely affect the community at large.

“Up to that point, we were against the commercialization of the field,” says Paul MacLean, the chair of PARA. “We did not want that because the reason is that then led to community impacts. That was key to our whole argument.”

These oppositional associations prompted an area resident to form a community group in order support the school’s field and dome, and help bring a positive presence to the neighbourhood.

“It was this negative voice and this very small, loud minority of people in the neighbourhood who were screaming against this field and this new facility,” says co-chair of the Friends and Neighbours of Central Tech, Neil Stephenson.

Students of Central Tech standing outside of their school before a field rally on Oct. 6, 2014. (COURTESY: Central Technical School)

Even prior to becoming a recognized organization, FANCTS sided with the students as volunteers. They coordinated rallies and walk-ins to raise awareness about the state of the field, which at the time, was being juggled in the courts.

Legal matters and red tape could have potentially plagued the TDSB’s championship field plan for Central Tech from the start. It was shut down at the committee of adjustment, denied at the Ontario Superior Court, and then rejected at the Divisional Court level.

Regardless, with the backing of Central Tech parents and alumni, FANCTS earned a seat at the mediation table. Unlike the earlier meetings, they could now express their views as an equal player. Stephenson credits his group as being a vital proponent in the deal. Without them, he says private-leasing company, Razor Management, the TDSB and the students would have been outnumbered.

“Razor Management and the TDSB would’ve had no community support and that would’ve really affected proceedings,” says Stephenson. “You would’ve had three community parties plus the city on the other side of the table.”

The city of Toronto was put in the position of reviewing the facility application that was sent in from the TDSB and Razor Management. When the submission was fully analyzed, the city’s planning department raised concerns about community access and the precedent this field would set for future sites across the Board if implemented.

“I grew up around the corner from the field and me and my friends would go and play pick-up football,” says Ward 19 Trinity-Spadina city councillor, Mike Layton. “That could be impossible now because the field will be permitted with games all the time essentially.”

The TDSB thinks differently. Central Tech will have priority access to use the field during school hours and for their sports teams, but on a larger scale, the facility will serve as a hub for schools from across the city to come and play.

The mediated Central Tech field and dome agreement will be an exact replica of what is in place at the University of Toronto’s Varsity Stadium.

“A number of other schools will visit this site whether it be for individual games or championships,” says TDSB spokesperson, Ryan Bird. “To be able to have a state-of-the-art facility with a professional, international-grade field is important to athletics for the Board.”

However, the deciding factor, raised by the city’s lawyer in the mediation process, was with the height of the dome. Without the compromise on the dome, there was a high chance that the deal would not get city council’s approval and the consent of local Ward 20 Trinity-Spadina councillor, Joe Cressy.

When Razor Management announced that they could live with a smaller dome and still make their business model work, the compromise fell into place.

“I just wanted to get on with it,” says Matthew Raizenne, president of Razor Management. “In terms of building a great facility for the community and the kids, if there had to be compromises, then so be it.”

As for the representatives from the local residents’ associations and FANCTS, they ended their longstanding tug-of-war by complying with a binding agreement that will see them join forces.

“We can work together on this, we don’t want to be in an adversarial relationship,” says MacLean. “We were quite clearly in favour of having a good field for the students, I think all parties are completely agreed on that.”

Putting aside their differences for the benefit of the local area, the Facility Management and Community Liaison Team are going to address, deliberate and resolve operational issues pertaining to the facility.

The mediated agreement took into consideration the important notion of what is best for the students.

From the outset, a useable facility is all that the Central Tech students wanted to achieve. The daily routine of trekking over to neighbouring fields for team practice at seven in the morning or trudging back from gym classes at three in the afternoon paid off in the end.

If all things go according to plan, the field and dome should be ready by September, just in time for Central Tech’s 100th anniversary. Soon, students will be able to walk out of the school’s front doors and onto their home field to practice and play.