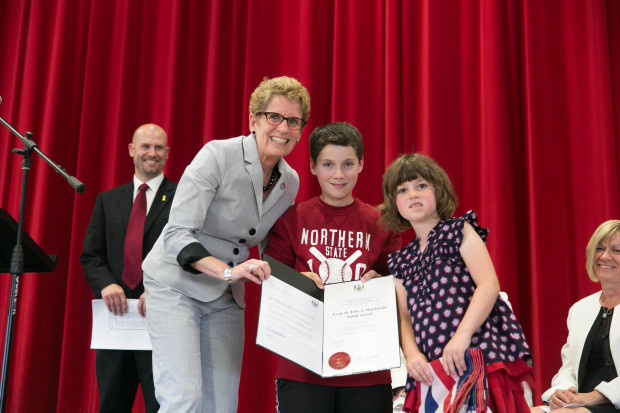 17 years ago, there was no sexting, kids typically got cell phones at a much later age than today and same sex marriage was...

17 years ago, there was no sexting, kids typically got cell phones at a much later age than today and same sex marriage was still banned in many more places compared to today. It is safe to say the world has changed quite a bit in the last 17 years.

Yet 17 years ago, in 1998, was also the last time Ontario’s sex ed curriculum was updated. It was finally last month that Kathleen Wynne’s Liberal government unveiled a new sex-ed curriculum for Ontario that will put us in line with the curriculums of other Canadian provinces as well as curriculums taught around the world.

“The government’s priority is the safety, health and well being of all out students. The current Health and Physical Education curriculum in Ontario is from 1998. It is 15 years out of date and was drafted long before the existence of Facebook and Snapchat,” said Gary Wheeler, a spokesperson for Ministry of Education in Ontario.

Wheeler said, “Students today have instant access to quite explicit information from unreliable and inaccurate and often offensive sources. This is why it is so important tot ensure that our children have the right information about their bodies, their relationships, their technology and sexual activity. When students have the most current, relevant and developmentally appropriate information they will be able to make informed decisions about their health, safety and well being.”

While the curriculum has received backlash from many different groups of people, including conservatives and some religious groups, many people have in fact been in support of what they consider a much needed update, given the change in technology and means of communication amongst children since the last time the curriculum was updated.

Karen Smith is the executive director of Thrive Child and Youth Trauma Services and believes that the curriculum update is important in order to prevent sexual abuse on the internet in today’s age.

Under the new sex-ed curriculum, Ontario students will now learn about some of the same things they were taught with the previous curriculum, but earlier on.

They will learn the “proper names of body parts” in grade 1, they will begin discussing the changes associated with puberty in grade 4 as opposed to grade 5.

When it comes to education about sexual orientation gender identity, students will now learn about these topics in grade 9.

Students will now learn about sexually transmitted diseases and infections in grades 7 to 8.

The United Kingdom has a similar attitude towards sex-ed education that the new Ontario curriculum reflects, but sex eduction is not compulsory in England and Wales as parents can chose to let their kids take part in lessons.

Robert Cooper, the spokesperson for the Department of Education in the United Kingdom said, “We want to see all young people leave school prepared for life in modern Britain. Good PSHE teaching has a vital role to in this. Giving younger people a better understanding of the issues they face today and supporting them to make informed choices and stay safe.”

According to the Department of Education, a statutory guidance makes clear that all sex relationship education is age appropriate and that schools ensure young people develop positive values and a moral framework that will guide their decisions, judgements and behaviour.

According to BBC, Britain has one of the highest teenage pregnancy rates in Europe and therefore sex education is something that is often discussed and debated in government and media reports.

The Dutch government has a program called “Long Live Love” which was developed in the late 1980s and it aims to give teenaged the skills to make their own decisions regarding their health and sexuality.

In 2012, sex-ed was made compulsory in all elementary and high schools.

According to UNESCO Courier, the Netherlands has one of the lowest levels of teenage pregnancies in the world.