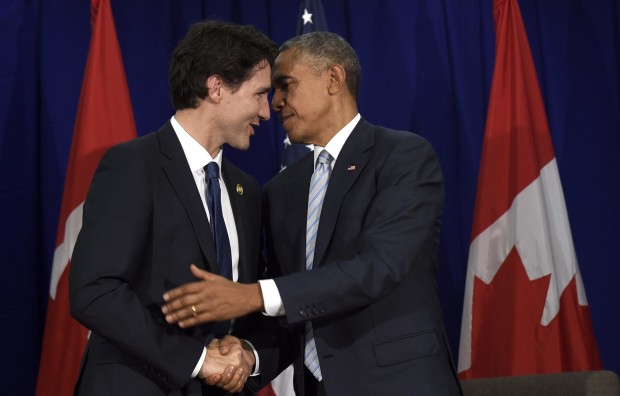 obama2 pm1 politics30 president4 primeminister1 statedinner1 trubama1 Trudeau10 washington1
Our Prime Minister Justin Trudeau and  U.S. President Barack Obama sit down for a meal at the White House tonight, but most of you are...

Our Prime Minister Justin Trudeau and  U.S. President Barack Obama sit down for a meal at the White House tonight, but most of you are excited about this state dinner because these charismatic leaders take us beyond formality and into some humanity.

Trudeau and Obama seem to be a lot alike. Although they have claimed their main talking point will be climate change,  we think its fair to assume they could trail off every now and then.

They both make a point of being well prepared for every press conference, meeting, and appearance.

They are serious family men, with a serious sense of humor.

Neither of them can even try to deny their infatuation with babies.

They both have beautifully intelligent, feminist spouses…

Whom they clearly adore!!!

Their special type of bromance is down right adorable…

And they’re not trying to hide it. #Trubama

Another thing they aren’t trying to hide? Tears, emotion, connection and understanding.

It is clear that we are at one of the most critical times in North American politics and as Obama is about to bid his farewell we are welcoming Trudeau to the stand as the next charismatic political leader. This dynamic duo will be short lived, so soak it up while you can!

Shania Lane is a student journalist studying at Humber College. She is enthusiastic, strong willed and hard working. She loves to write about controversial topics such as environmental issues and human rights issues. Anything that gets people debating and actively engaged in their opinions.