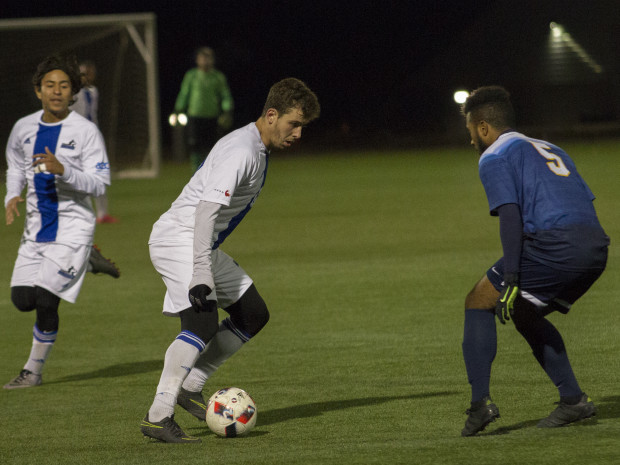 It’s time once again to ring that victory bell.

The Humber Hawks wrapped up a history making and record breaking men’s Varsity soccer season after a 2-0 win over the Keyano Huskies on Saturday in Fort McMurray, Atla.

This win also ties the Hawks with Capilano University for the most national wins in the country.

The Hawks took their first advantage in Saturday’s game when a red card was issued to the Huskies early on.

Jordan Piccinin, a third year forward from Brampton scored the first goal for Humber early in the second half.

Team captain Kingsley Boasiako, also from Brampton, followed up with the second and final goal off a corner kick.

“For me it’s not more of an individual goal, I’m more of a team oriented person, so it’s more of an accomplishment for the team,” says Boasiako.

The Huskies tried to press on but couldn’t get one past the Hawk’s goalie, Karman Singh, who polished off his third clean sheet of the tournament.

“Those guys are unbelievable attackers, so as long as the team plays defence, we’re gonna score goals,” says Boasiako.

He also says that a strong defence really determines the win.

“Our whole team is defense oriented. Every time we go in the huddle, we always reiterate that defense wins games,” Boasiako says.

Assistant coach of the Humber Hawk’s and former player Jason Mesa, says the captains and players this year really took the lead on the victories this season.

“Our leadership was in the players themselves, so when you look at our captains that have been around for three, four, five years now, they’re the ones that highly motivate the new players coming in, so they kind of set the standard,” says Mesa.

Mesa says he feels pride in the team and coaches and the hard work everyone has put in this season.

“(The team is) definitely going to be in a class of its own, I mean to truly have a perfect record, 16 wins, no losses, it puts you in a very unique category,” Mesa says.

As of now, Mesa says there is a, “good chance there will be a significant turnover,” for this star team next season, however, he says the team is in talks with the players, many are enrolled in one year programs that they may expand on.

It may be too soon to tell if this historic line-up will remain in-tact next season.