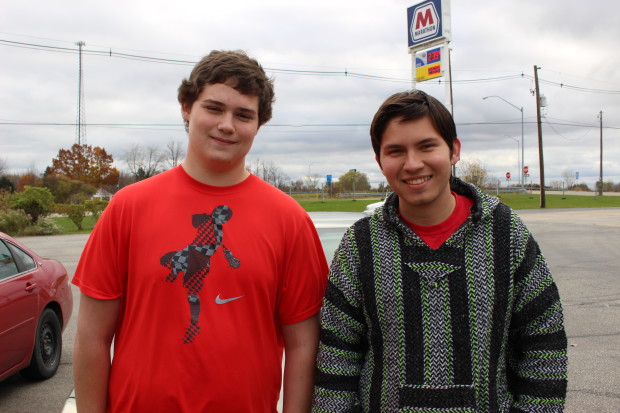 Trump27 U.S. Election6
On Day One of our travels things weren’t going well for us. Between being denied access to locations, people not wanting to speak to us...

On Day One of our travels things weren’t going well for us. Between being denied access to locations, people not wanting to speak to us and the election results not going as anticipated, we felt we were fighting an uphill battle. I remember telling my fellow student journalists that our experience was like a plot to a story. The build up to the climax,  after the climax the resolution, followed by a happy ending with happy people. We expected to have a happy trip back with a Clinton win.

That wasn’t the case at all.

On Day Two of our travels, it seemed as if the climax would never end. When we entered Pennsylvania, everything kept escalating. In Erie, Pennsylvania, we stopped at a local gas station off of the I-90 to fill up and talk to people about how they felt about a new day in America with Donald Trump as president-elect.

Before election night, I saw Pennsylvania as one of several Democratic states in the country. After these interviews, that changed drastically.

No one was outside so we went into the station. It was independently owned, which is what I believe helped us get an interview from one of the employees. Matt Williams, one of two people working the station at the time, agreed to be interviewed. We asked for his full name and his photo, and he did not hesitate. Another plus in our favor.

Williams, like the many people we interviewed, didn’t vote in this election. However, he did tell us he was leaning a bit more to the right this time around.

“Personally I didn’t vote for either candidate because I really don’t like Hillary, I mean she’s just an Obama carbon copy to me,” Williams said. “I kind of wanted to see a Republican, I think we kind of needed to get stronger during war time. And we needed to like figure out, I think we needed to start figuring out our situation in our country.”

Williams said he was intrigued to see Trump as president-elect and to see that Republicans had “taken back” the country.

A few more people started driving into the station. We went outside to see if anyone else was interested in speaking about the election outcome.

I had earlier overheard some supportive Trump remarks from a young man. I noticed he was leaving the gas station hut with a friend so my colleague and I asked them if they would mind answering a few questions.

Brett McCann, 16, and Henry Chiapa, 17, did agree to talk to us. It turns out friends can indeed have their differences. McCann is a Trump supporter in the making. While underage, McCann says he would vote in the next election. “I’m going to vote for Trump second term.”

An embarrassed Chiapa told McCann “you’re such a dick.”

This election meant a great deal to Chiapa for personal reasons.

“(Trump) said a lot of things negative against Mexicans. My heritage is Mexican, and we have illegal immigrant families here because their visas expired. They’re actually leaving now because they don’t want to get deported,” Chiapa said.

Chiapa has a lot more at stake than his pro-Trump friend. The possibility of his family being torn apart is a fear that became more real after a phone call from Chiapa’s aunt in Los Angeles, California that day.

“My aunt called me this morning and was like ‘we’re leaving’. What they originally thought was ‘there’s no way in hell he’s going to win’, that was their way of thinking. But then they didn’t have a set plan because they’re illegal immigrants they could just move whenever they want,” Chiapa said.

Besides Chiapa, most of the people we spoke with in Pennsylvania seemed pro-Trump. Interestingly enough, on our way to Cleveland on Tuesday, Nov. 8, we came across no Trump supporters. Now all of sudden, those are the only people we could find. Especially for Rebecca Stephens,  who was very pleased to see Trump get elected.

“I didn’t think that it would happen. I really thought Hillary would win and I’m really pleased that Trump did,” said Stephens, a resident of Knox, Pennsylvania. We first spotted Stephens smoking a cigarette near her pick-up truck that contained a ATV, nets, several bags and copious amounts of camouflage clothing.

Stephens said she had worked the polls the day before and was able to see the change coming to her state as the results came in at night. “Pennsylvania’s been a Democratic state for about 28 years and I think the people came out to show that they were voting against the government and how it has been going for the past couple of years,” she said.

Change in government was not Stephens’ only motivation for her to support Trump. Her personal beliefs also played a large part. .

“For me, I’m pro-life. I believe that a child is a child as soon as the egg meets the sperm. There doesn’t need to be a heartbeat or anything, it’s a baby from day one,” said Stephens. “It’s every American owning guns and our right to own guns. My husband’s a police officer. We’re all Americans and totally believe everyone should be allowed to own a gun.”

Stephens was the last interview we did at that gas station in Erie on that day, and it was enough. Those interviews were more than enough to come to the realization that the climax to this story wasn’t to be found in Cleveland on Day One, but rather on our way back as the election results were known.

Cleveland was only part of the rise building to this story’s climax. As for the resolution and the happy ending with happy people? Yet to be told.