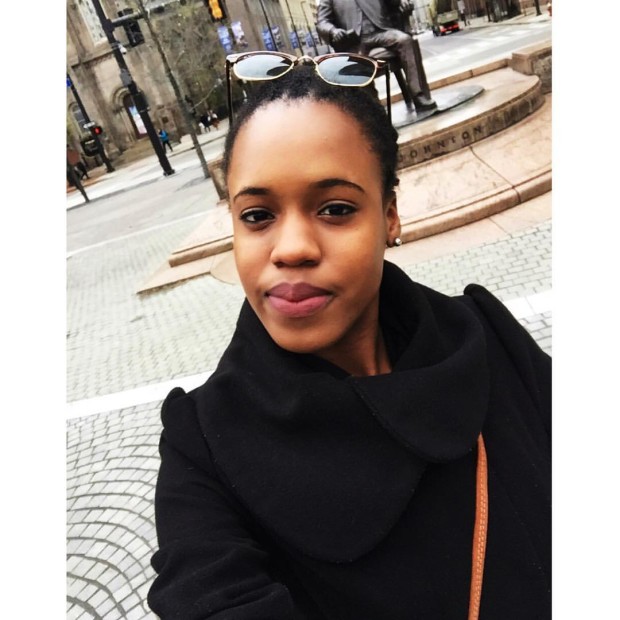 My U.S. experience as a black female journalist

Trump27 U.S. Election6
Our journey back from Cleveland, Ohio after covering the presidential election was a huge contrast to our cheerful and optimistic journey there. The outcome...

Our journey back from Cleveland, Ohio after covering the presidential election was a huge contrast to our cheerful and optimistic journey there. The outcome of Donald Trump being elected President of the United States was one none of us expected. Our emotions were not entirely intensified by our personal preference or dislike towards Hillary Clinton or Donald Trump but from our experience of being face to face with people who saw Trump’s win as a detriment to their way of life in the U.S. Among these people were the minorities, immigrants, blacks, Hispanics and members of the LGBTQ+ community.

My experience was most affected by how minorities will be treated by a Trump government. I am a black female with family members in the U.S. belonging to the country’s large population of immigrants. This realization resonated with me after speaking with people during the rest stops we took as we traveled along the I-90. A young man who was worried about immigrant family members from Mexico with expired visas; Two African American female students concerned Trump’s sexist remarks might affect their future in the U.S; And a local bus driver’s words that Trump supports only the rich and powerful and not ordinary people.

That local bus driver was Cleveland native Martin Bonner who said he was surprised and alarmed when he heard the news that Trump was the next president. Bonner, a middle-aged African American works on a weekly early morning schedule and had gone to bed early on Tuesday, Nov. 8, thinking Clinton was going to win.

“My wife works third shift of the day and of course I get up and work first, so I would set my alarm at 4:30 a.m. but she called and I was like you woke me up and she was like ‘well, Trump is president’,” he said.

Bonner said hearing this news was hearing the unthinkable, it was so completely unexpected. Bonner said he is still trying to wrap his head around the idea of Trump being president and how it might affect the U.S. Bonner said he thinks minorities will be badly affected by a president-elect who is a “selfish self-made billionaire that does not respect women, minorities or people with disabilities.”

Before going on this assignment, I had read articles about many incidents of racism, sexism and xenophobia from some Trump supporters. This was something that I was conscious of when we went into dominant Republican states. As a black woman with a strong Jamaican accent, I could not help but to be a bit fearful when approaching a few people for interviews. Not that I was making a generalization that all Trump supporters were racists xenophobes who would try to insult me but it was a possibility and I had to prepare myself. I was also the only black individual in our group.

We managed to get a few interviews with some  Trump supporters who were mostly white small town citizens, some with very conservative views on abortion, women’s rights and gun-ownership laws.

We interviewed truck driver  Steve Lois and his partner Mary-Lou King, two locals from a small town in Pennsylvania who both expressed their satisfaction with Trump as president.

“One thing I didn’t like was her (Clinton) with the abortion. There is just so many evil things and I mean if you have God on your side there is some hope with Trump and God,” said King.

“If Trump can control his mouth and his hands,” Lois quipped.

This comment caught me completely off guard as I struggled to maintain my composure in order to continue the interview. As a journalist, I am aware that I will encounter people with opinions that I do not agree with. It was also a good learning experience for me to hear the reasoning of some Trump supporters.

However, as a broad-minded individual, I felt a bit uneasy about some of these remarks. I was also left to wonder if some of these individuals had racist thoughts. I also found it a bit difficult for me to be objective as I was in opposition to a lot of remarks made by a few Trump supporters.

Trump throughout his campaign has made numerous remarks that many label as being sexist, racist and xenophobic.

“There have been numerous reports of incidents of racism and bigotry over the last week following Trump’s election. The Southern Poverty Law Center and the Council on American Islamic Relations, two organizations that track hate crimes, have both reported an increase in such incidents and suggested that the level of hate crimes may have surpassed that of the period immediately following the Sept. 11 attacks according to a Huffington Post article.

While I had no experience with racism when I was  in the U.S. last week, my knowledge of the reported incidents had a huge impact on how cautious I was.

This was something that somewhat limited me in going out and speaking to people. However, this was a great lesson as now on reflection I would have handled myself much differently. It was an experience that taught me that as a journalist belonging to a marginalized group it is highly necessary to be cautious but at the same time it pays to be a bit fearless and resilient.

As I crossed the border back into Canada, exhausted and a bit disheartened by some of our unpleasant encounters, I went to bed with an entirely different attitude going forward as a journalist. Hearing the plight of many marginalized people in the U.S., whose voices aren’t usually heard in the media, made me realize one thing – there is much work that needs to be done in journalism. As I go forward in pursuing a career in advocacy journalism this is an experience that will forever have an impact on my outlook and my efforts to bring about much needed social change.

Just a bright-eyed and highly driven student journalist attempting to change the world through Journalism.