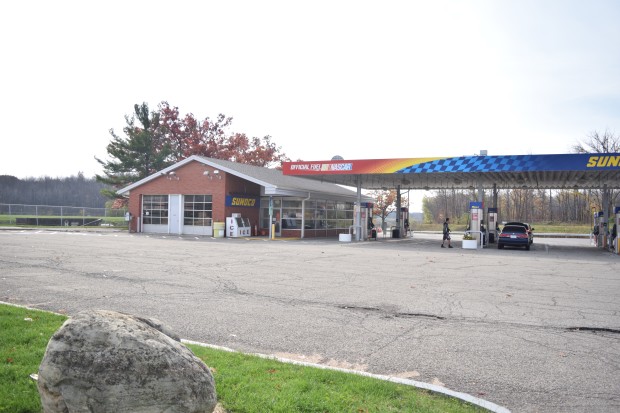 Trump27 U.S. Election6
Just off the New York State Thruway in northwestern New York sits the Angola Travel Plaza, complete with all the amenities a traveler could...

Just off the New York State Thruway in northwestern New York sits the Angola Travel Plaza, complete with all the amenities a traveler could desire. The plaza feels like a strip mall that was built in the ’60s. There’s an automatic piano playing Elton John, and restaurants of every flavour including McDonald’s and Cinnabon. The Farber gift shop sells fridge magnets and over priced cigarettes. Despite a display of magazines contemplating the outcome of the election, the cashier at the counter says he is not following the election. The 19-year old has a mixed breed puppy named Luna, and he says his time is spent between working at the plaza and playing with his puppy – no time for politics.

Outside of the Travel Plaza is a Sunoco gas station. I found Jason Zieba sitting behind the counter of the relatively sparse store passing time on his phone. Zieba doesn’t want Clinton to win, he says her time as New York senator has left a bad taste in his mouth. The scruffy, blue-eyed attendant has his eyebrow pierced, and he told me that Clinton had done nothing for him during her time as senator – she sent everything that way, Zieba says, signalling east. So after work he is going to cast his vote for Trump.