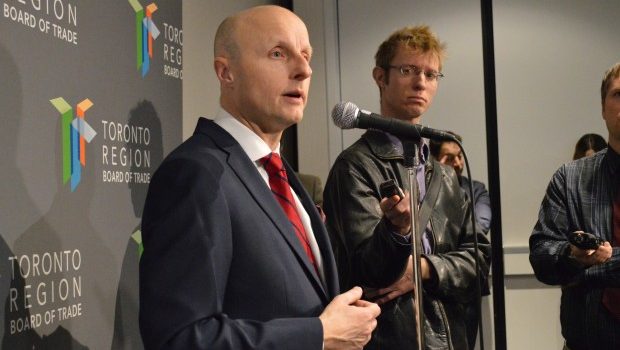 GO Transit3 GTHA1 Metrolinx1 Toronto158 Transit26 TTC18
After half a decade of growing pains, TTC CEO Andy Byford reflected on the last five years and what’s to come at the Toronto... 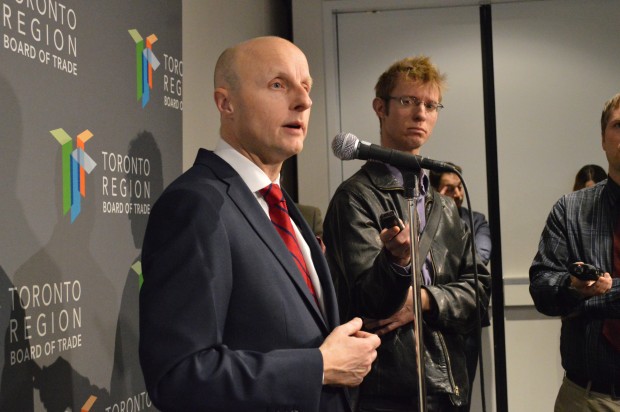 After half a decade of growing pains, TTC CEO Andy Byford reflected on the last five years and what’s to come at the Toronto Region Board of Trade on Jan 7.

In 2012, a newly-appointed Byford set out with the five-year vision to make the TTC “a transit system that makes Toronto proud.”

Now heading into the final year of the plan, Byford said he looks to the coming years with optimism and a commitment to safety.

According to Byford, the TTC has become exponentially safer, increased its diversity at all levels of employment and seen more satisfied customers while also witnessing a reduction in system interruptions, alongside the introduction of PRESTO.

Last year saw the TTC renew over five kilometres of rail throughout the system, vital maintenance that required what he calls “unpopular but worth the pain” system closures.

Byford used his time at the podium to lay out his vision for the year ahead.

“The key deliverables for me are to open the Spadina Subway Extension up to York Region, begin the roll-out of new signalling system on Line 1, to complete the introduction of PRESTO,” said Byford. “In doing so, we will continue to work on making it highly reliable, and also introduce a minimum of 40 new streetcars in 2017.”

Despite some challenges, Byford is convinced people will be delighted with the new stations on the Spadina Line, calling them a “testimony to the TTC’s capability in delivering big projects.”

In addition, Byford said he looks onward to the future with PRESTO transforming how people use the TTC- working with Metrolinx to enable the phase out of tokens, ticket and paper transfers.

Byford also wants to continue to see customers satisfied with getting from A to B.

“I want to see our customer satisfaction score rise to 85 [per cent] or higher, and this will require a sustained effort across all departments,” said Byford.

Beyond 2017, the next five-year plan is currently in the works with the expected completion of automatic train control on Line 1, the implementation of one-person train operation, increased efficiency in subway station management, fare integration with GO Transit and across the GTHA, and the possibility of a completely cashless future for the system.

Byford also made mention of the total modernization of Line 2, with hope that the transition will be easier due to “the benefit of lessons learned to date.” Above ground, the TTC will work on successfully introducing new streetcars to the system.

Byford believes both the biggest challenge and biggest opportunity for the network will be its expansion — a controversial topic at city hall.

“Job one is to replace the Scarborough Rapid Transit Line– something that was planned to start in 2015 after the Pan Am Games and that is the single biggest thing that now keeps me awake at night,” said Byford.

Other projects planned to progress include Smart Track, the Waterfront and Finch LRTs, Eglinton Crosstown integration, and planning for the Relief Line subway and the extension of Line 1 to Richmond Hill.

The challenge to the expansion is money for the TTC as they move forward. If the TTC is to keep from slipping backward into the state it was just years ago, Byford insists that that only continued investment will keep it afloat.

“That means support from the Province, too… in addition to the City, and that means finding further ways to improve the efficiency of our operation,” said Byford.

Looking forward beyond dollar signs and systemic challenges, Byford feels the future is bright for the TTC and remains convinced that his team can deliver a vision that makes the city proud, realizing the hope he set out to achieve five years ago.

To do so, Byford is calling on another big push from everyone.