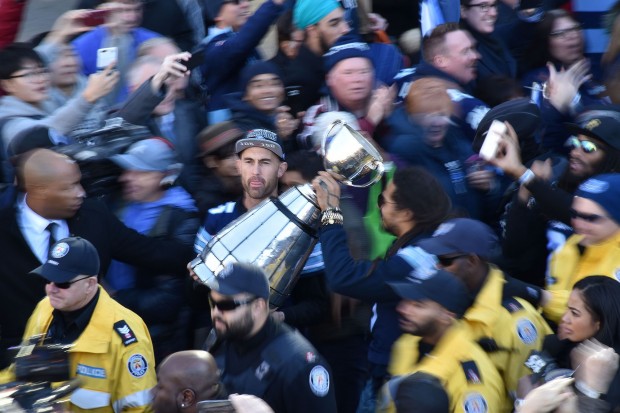 The event was hosted by TSN’s Cabbie Richards and Mayor John Tory.

Thousands of fans filled the square in front of City Hall to join the Argos in celebrating the team’s 17th Grey Cup win. The Argos beat the Calgary Stampeders on Sunday with a final score of 27-24.

Many fans came dressed head-to-toe in Argos memorabilia and were excited to show their Argos pride.

Fans were excited to see the Grey Cup as well as Quarterback Ricky Ray, who carried in the cup at the beginning of the rally and fan-favourite MVP DeVier Posey.

One of fans main concerns at the rally was whether or not QB Ray will be returning to Argos football next year.

The crowd chanted “one more year” while awaiting the speech of Ray.

“Only one? Why not two?” said Ray to the cheering fans.

The Argos made it clear that they are thankful for the support of the fans and are excited to see where next season takes them.