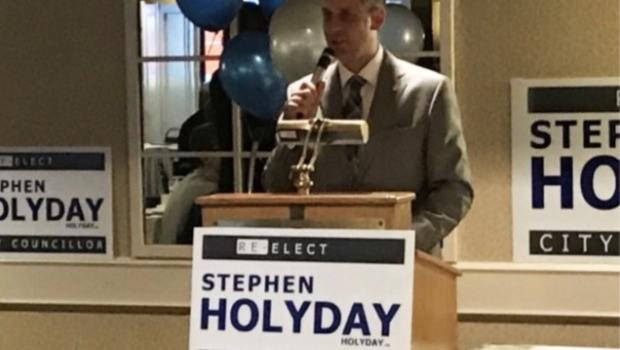 By Brandon Tretter and Aaron Ranson for Skedline.com You could sense the uncertainty in the room as people started to file into the banquet... 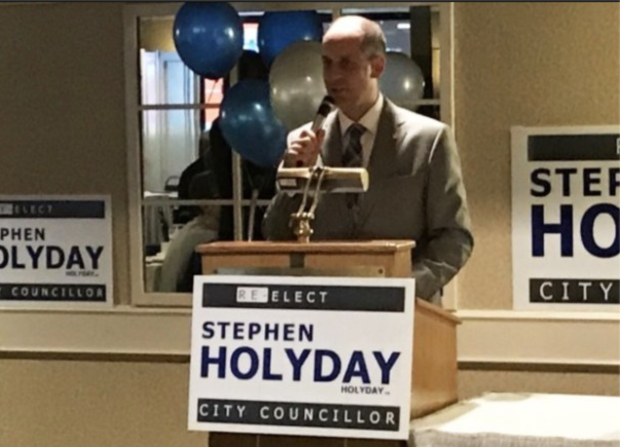 By Brandon Tretter and Aaron Ranson for Skedline.com

You could sense the uncertainty in the room as people started to file into the banquet hall at the Canadiana Restaurant. Workers at the restaurant were preparing the hall for the night. The tables were done-up nicely, with white tablecloths and a buffet ranging from chicken wings to shrimp was put out. A few of those in attendance even indulged with a beverage. Stephen Holyday’s election night party had begun.

As  the clock approached the 8 p.m. poll closure, no one was really sure how it was going to go for the Holyday campaign. Holyday was running for councillor in Ward 2 Etobicoke Centre, and was up against fellow incumbent John Campbell. Premier Doug Ford’s Better Local Government Act shrunk Toronto City Council from 47 down to 25 wards and as a result 11 wards pitted incumbent vs. incumbent.

One of the first people to walk into the banquet hall was Holyday’s father and former deputy mayor, Doug Holyday. Doug came over to the table where we were seated with members o the media members and introduced himself. He said he was nervous about the night.  The lack of polling in the ward leading up to this night left Doug without a real feel for how the night would play out, but he said he was hopeful.

Doug served as city councillor for Etobicoke Centre from December 2000, until August 2013. He also was the Deputy Mayor under Rob Ford- a position  that his son Stephen has held since 2017.

Holyday’s supporters enjoyed the buffet and were fixated on the big projector screen in the corner of the room that was showing CP24’s live coverage of election night. At a 8 p.m. there was a sense of relief in  the room, a woman said ‘now, what’s done is done.’

As the results rolled in, the room erupted as CP24 called the election in favour of Holyday, edging out John Campbell 14,627 votes to 13,441. Supporters could finally celebrate, the long, and unique campaign was a success. We spoke to University of Toronto student and Campaign Intern Alissia DeNucci about the unprecedented race for councillor and how their team coped with the expanded Ward 2.

“We felt confident as the support in the previous Ward 3 where Stephen was the incumbent was overwhelming,” DeNucci said. “The support in Ward 4 however, seemed to unnerve the campaign slightly. We seemed to be losing what we call the ‘Sign War,’ but voters we had talked to eased our minds by reassuring us that we had their vote and the signs don’t tell the whole story.”

Doug Holyday shared that sort of nervous confidence. Although he wasn’t sure what the results would read he said that as a father he is very proud of the fact that Stephen has done this election the right way.

“Stephen has done a good job, he’s prepared himself well. Im proud of the fact that he has the best attendance on council and the lowest office expenses on council and I think those are things that set a good example for others and it sets the right culture,” Doug said. “If councillors don’t care about money then who the heck is going to care about it down there? If they don’t fulfill their duties and vote when they’re supposed to, and a lot of them don’t, then what message is that sending to the senior staff and others who work there? So I think what Stephen does is right and he goes about it in a good way.”

Suddenly, Doug’s attention moved to the entrance way. Stephen Holyday had arrived at the banquet hall, greeted with loud applause and raucous support. He hugged his mother and father and began to make his way around the room, thanking everyone.

As Stephen made his rounds, we were able to catch up with him and get his thoughts on the campaign.

“I’m excited about the road ahead, I met a lot of great people on the campaign trail. I have a great working relationship with the people in the former Ward 3, but I got to meet some new people in Ward 2 and think about some of the issues and concerns that they’ve got. So I’m really looking forward, just to getting back to work.”

Stephen says that campaigns can be a bit of a distracting time for politicians, but the new layout of council brings a whole new set of challenges.

“My first order of business is really to connect with some of the community groups and associations in the new part of the ward,” Stephen said. “Just to make sure that if there are projects that are on going, to get up to speed on what those councillors have been working on up until this election and making sure those residents are well served and don’t feel a gap or a break in service.”

Speaking to the challenges in this election, Holyday spoke of the good fight but up by John Campbell.

“I always knew that this would be a tough race between two incumbents that have good track records and have their supporters in both communities,” Stephen said.

He expressed his desire to see the voting breakdown to see how effective his campaign was in the old Ward 4.

“I’m very interested to see the voting results ultimately and how things were divided up and how the polls went. But I just kept getting the message back every-time I knocked on a door of people wishing me well, that I’ve got their support, that they were familiar with me and they’d seen me in the media and that they liked what I did. Then there were others that said that I’d made it a tough choice and that they needed to do their homework to try to figure out which councillor they wanted to be their representative, and I respect that very much,” Stephen said. 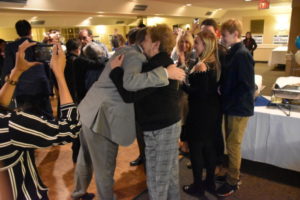 Stephen Holyday embraces his mother after winning the Ward 2 election

As the night came to an end, Stephen gave a speech where he thanked everyone in attendance and those who worked on his campaign, for all their hard work. He ended his speech with a few words for those in Etobicoke

“Maybe a council of 25 means that the suburban councillors, including us in Etobicoke, will have just a stronger voice out there and they’ll hear us more and it will make sure we get everything we need to keep this place great.”

Stephen ended the speech by once again thanking everyone, and sharing a hug with his wife and children, who had joined him at the podium.