John Tory is re-elected as Mayor of Toronto

John Tory has won the mayoral race of Toronto’s municipal election by a landslide.

“Building on the foundations of the last four years, over the next four years my goal is to make sure no one, anywhere in our city, feels like opportunity is a distant point on the horizon,” Tory said during his victory speech Monday night, in front of supporters.

In an interview with CP24 prior to the election, Tory said, “I passionately want to continue the work and build the transit and address the affordable housing, and really try to have the city under stable leadership.”

Keesmaat also stands for affordable housing, as well as a greener Toronto, transparency in Toronto’s City agencies and gender fairness.

Keesmaat, 47, has lived in Toronto all of her adult life and served as chief planner from 2012 to 2017. After leaving her position, she became a teacher at the University of Toronto and announced her candidacy for mayor in July.

In a video posted on Keesmaat’s website, she said, “Over the last four years, our city has changed because we’ve been let down by a lack of leadership.”

Four days before the election, Tory told CP24 Keesmaat criticized his leadership while campaigning,  a tactic he said he avoids in campaigns.

“Ms. Keesmaat’s had quite a bit to say about me personally, which I find sort of mystifying and often times I try not to do that because I just think really what people want to hear about is the issues,” he said.

Tory first won the mayoral election in 2014. His opponents included Olivia Chow and incumbent Mayor Rob Ford until Ford’s cancer diagnosis caused him to drop out, and his place was taken by his brother Doug Ford.

Doug Ford, now Ontario Premier, decided with his government in July to reduce Toronto’s city council from 47 to 25 members. After the announcement, Tory faced criticism for not preparing the city properly, and fellow councilors accused him of not taking the issue seriously.

“I didn’t take it seriously because I didn’t think this was put forward in a serious way,” Tory said in a CBC article in July. “Obviously that turned out not to be true.”

As far as the actual system plan, Tory is not in favour of the decision.

In a press conference video released by the Canadian Press in September, Tory said, “I have opposed, and continue to oppose, the provincial government’s actions. They are unfair, they are unnecessary, and they are unprecedented.” 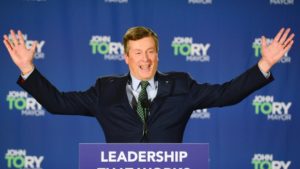