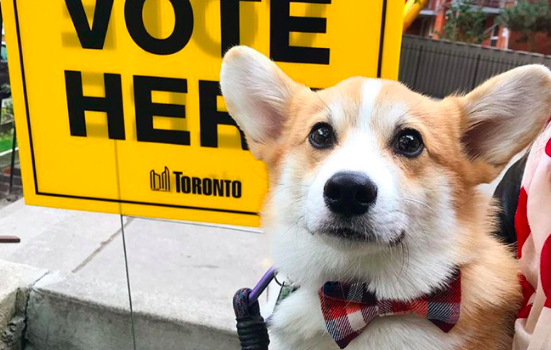 Social media was relatively quiet during the Toronto Municipal Elections. Just over 40 per cent of eligible voters made it to the polls this... 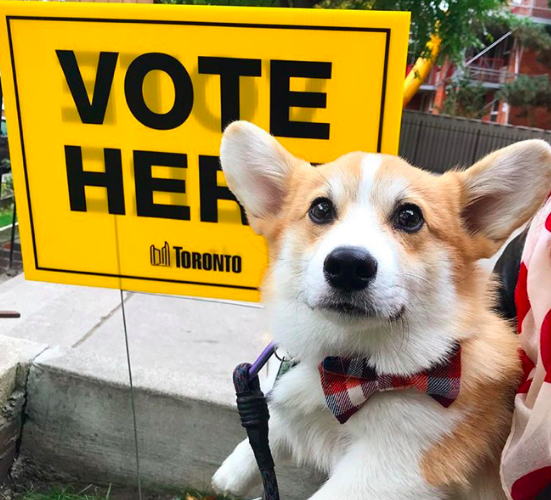 Social media was relatively quiet during the Toronto Municipal Elections.

Just over 40 per cent of eligible voters made it to the polls this year, compared to around 60 per cent four years ago.

The polls are now closed in Toronto. Keep it here for live results and analysis. #TorontoVotes https://t.co/Mh1zDYQSNi

The most common images posted to Instagram searchable by relevant hashtags were of people’s pets and children in front of “Vote Here” signs and next to voter cards.

After much deliberation, I have decided to announce my candidacy for Mayor of Toronto! 🇨🇦 Though I am joining the race a little late, I believe together we can make a better city for all doggos & their humans. Key points of my platform include: . – More treats for good puppies🍬 – Mandatory belly scritches of at least five minutes – Renewable water bowls💦 – Off-leash parks in every neighbourhood 🍃 – Peanut butter flavoured sidewalks 🥜 . So vote for me, Knuckles for Mayor! But in all seriousness, you have 1-hr left to vote #toronto! Polls close at 8pm ✅ . . . #corgigram #corgifeed #corgiaddict #torontovotes #vote #municipalelections #topoli #corgigram_ #corgi_ig #mydogrunsthe6ix #torontodogs #myfavcorgi #corgipuppy #bowtiesarecool #bowtie #buzzfeedanimals #votingmatters #mydogiscutest #the6ix #torontolife #doggosdoingthings #corgithecute #bestwoof10k #corgisareawesomee

Twitter was full of the usual commentary, with users expressing their disappointment for some wins and creating memes poking fun of the night’s candidates.

I designed some new shirts for @norm that he can start selling tomorrow. #TOpoli #TorontoVotes #TOelxn pic.twitter.com/01wVHp1DcL

Most of the other hashtagged social media content about the municipal elections was posted by traditional news outlets, reporting on the results in real time.

John Tory cruised to victory in the 2018 Toronto election, easily winning a second term in office by defeating his main competitor Jennifer Keesmaat with more than 60% of the vote. . . . #cityvote #topoli #toelxn #torontovotes #torontovotes2018 #johntory

The party has wrapped up at the Jennifer Keesmaat celebration headquarters. Keesmaat was gracious in her concession speech to returning mayor John Tory. Many of her supporters say they want her to run in provincial or federal politics, but she says she is making no decision for now. . . . . . #TOpoli #cityvote #johntory #jenniferkeesmaat #680news