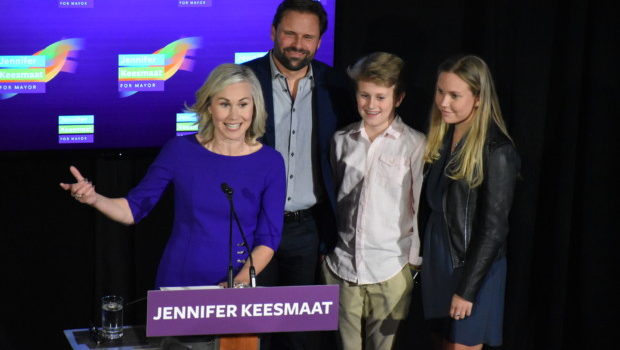 Tory wins second mayoral term in a landslide vs. Keesmaat

Toronto Municipal Elections7
By Alex Figliomeni Skedline.com The votes are in — John Tory won the 2018 Toronto mayoral election. When Jennifer Keesmaat arrived at her venue, she was... 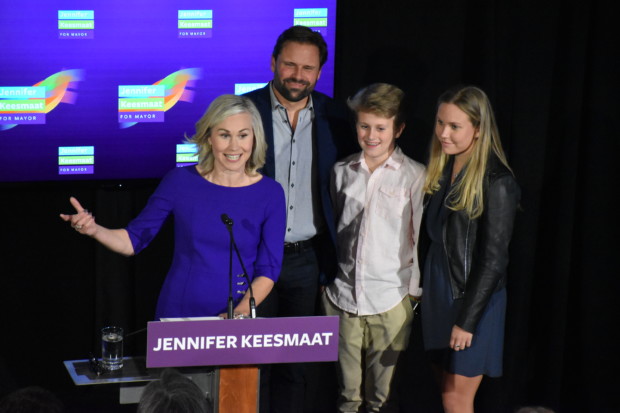 The votes are in — John Tory won the 2018 Toronto mayoral election. When Jennifer Keesmaat arrived at her venue, she was greeted by a long round of applause. The atmosphere was loud and vibrant, as the crowd chanted Keesmaat’s name and thanked her for all her hard work during the election. In Keesmaat’s speech, she thanked her family, her supporters throughout her campaign, and finally congratulated Tory.

Keesmaat took to Twitter after her speech tweeting, “We’ll continue to work, with passion and purpose, towards building a city that works better for everyone: a city that’s more affordable, more livable, more equal, and more sustainable. Thank you, Toronto.”

John Tory, the 65th Mayor of Toronto, was first elected to office in 2014. Keesmaat is Toronto’s former chief city planner, a position she held from 2012 to 2017. She announced her candidacy for mayor on July 27, in the wake of the Toronto City Council cuts from 47 wards to 25. Ontario Premier Doug Ford passed Bill 5, named Better Local Government Act, reducing the Toronto city council to 25 and returns to the 2014 method of selecting chairs in the regions of York, Peel, Niagara and the District of Muskoka. Ford’s government claims reducing the size of Toronto City Council saves Toronto taxpayers more than $25.5 million over four years.

Keesmaat was city planner during the premier’s brother, Rob’s, term as mayor. Keesmaat and Tory are no strangers; they worked together while serving on council. They worked together in developing projects for transit, like Smart Track and Vision Zero. There were public disagreements between the two on several policies, including the debate about removing the Gardiner Expressway. The tensions lead her to leave her position and subsequently run for mayor.

During the campaign, the two candidates spoke about significant issues, but never together in a debate. Crime, city, and transit planning were essential points in both campaigns. Below are the plans from Keesmaat and Tory to create a thriving town.

Keesmaat said she would ban handguns and ammunition. She wants to focus on crime prevention by providing economic and mental support for youth and address the root causes that can lead individuals down the wrong path. “When it comes to public safety, we can’t just wait for a crisis to act. As mayor, I will be focused every single day on ensuring we all feel safer in every corner of our city,” Keesmaat said at the Global News Radio debate on Sept. 25.

Keesmaat’s plan includes building 100,000 purpose-built affordable rental homes over the next ten years, along with a rent-to-own program, to help people transition from renting to owning.  “Too many young people are leaving Toronto, and young families are holding off on having kids because they can’t afford a place to call home,” Keesmaat said at the debate. She wants to use city-owned land, to build affordable homes instead of condominiums.  She also wants to tear down the elevated portion of the Gardiner East and replace it with a grand boulevard.

Tory has said he plans on building 40,000 affordable rental units over 12 years, through developing city-owned land, exclusionary zoning, and partnerships with private industry. “I am committed to keeping Toronto affordable by keeping property taxes low, addressing transit costs and affordable housing through prudent leadership we have made major investments in transit, housing, and poverty reduction while keeping tax increases at or below the rate of inflation. I am committed to keeping this promise in the next term to keep Toronto affordable,” John Tory said at the debate.

Keesmaat wants to reduce the speed limit on all residential roads to 30 km/h. She plans on getting the Relief Line built three years faster than the original completion date. She wants to implement an enhanced bus service where it’s appropriate and to design and build the Jane LRT. “My plan is for an integrated, city-wide transit network that weaves together subways, LRTs, streetcars, and buses to shorten people’s commutes and ensure there is great transit in every neighborhood in the city,” Keesmaat said during the debate.

Tory created a citywide transit network plan, which plans to build multiple projects at the same time like Smart Track, the Relief Line and the Scarborough subway extension. “I secured $9 billion from the other governments to get it built. I’ve also implemented shorter-term measures to ease congestion,”  Tory said during the debate.