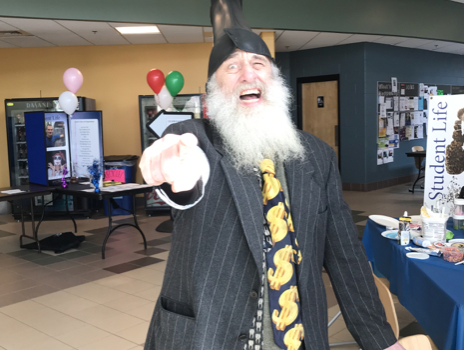 Time travel, free ponies, and zombie preparedness are just three policies in 58-year-old Vermin Supreme’s satirical presidential campaign. He was seen canvassing through a local community college in Nashua, NH yesterday, shortly after Sen. Elizabeth Warren concluded her Get Out The Vote event at the same venue.

Supreme drew attention to himself not only by shouting to vote for him but also because of the giant rubber boot he was wearing on his head. He then was invited to decorate cookies at the college and immediately began to create a self-portrait with black and white frosting.

While decorating, Supreme told Skedline that his campaign is off to a “rip roaring start,” and that he has been “running” for president for many years now. He added that he has also run as both a Democrat and a Republican.

“I’ve been running in the New Hampshire primary since approximately 1992. Although, I’ve only been on the ballot since 2008, so I’m not sure how you calibrate that,” he said.

This year, though, has been a little different for Supreme. He said that he has been recruited by the Libertarian Party. Although Supreme has been involved in American politics for many years, he believes that this is his first “real, serious, actual campaign.”

“In the past I have run as a Democrat and a Republican but I was neither of those things. I am, in fact, a libertarian. I am not trolling the party. I am offering the party the opportunity to utilize me to troll America a little bit, if you will,” he said.

It isn’t only Supreme’s rubber boot hat or several neck ties that attracts attention, although he believes they have helped with communication and garnering “media addresses from around the flat earth.”

Supreme is doing things differently due to his views on the American electoral system.

“It is my contention that the duopoly electoral system has risen to the level of a joke,” he said.

Supreme does not have any scheduled upcoming events, but is known to show up at the events of other presidential candidates around New Hampshire.