Firefighter who tried to help George Floyd to resume testimony

Chauvin Murder Trial1 Derek Chauvin1 George Floyd1 USA4
(REUTERS)– A Minneapolis firefighter who said she was prevented from offering medical aid to George Floyd during his deadly arrest returns to the witness...

(REUTERS)– A Minneapolis firefighter who said she was prevented from offering medical aid to George Floyd during his deadly arrest returns to the witness stand on Wednesday.

Genevieve Hansen, who was off duty at the time, is one of the key witnesses in the trial of Derek Chauvin, the former police officer charged with Floyd’s murder.

“I pled and was desperate,” she testified on Tuesday, dressed in her Minneapolis Fire Department uniform.

Hansen said another officer at the scene told her, “If you really are a Minneapolis firefighter, you would know better than to get involved.” 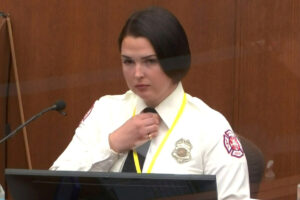 The off-duty firefighter can be heard on video screaming at the police to check Floyd’s pulse.

After Hansen’s fiery exchanges with Chauvin’s lead lawyer Eric Nelson, Judge Peter Cahill of the Hennepin County District sent out the jury and reprimanded the witness, warning her not to argue with lawyers or provide unrequested information to the court.

The third day of testimony in the Chauvin trial comes after jurors on Tuesday heard a series of bystanders describe in detail how they watched Floyd’s murder on May 25, 2020.

Among the witnesses on Tuesday was the teenager who recorded a video viewed by millions worldwide. The footage shows the police officer Chauvin, who is white, using his knee to pin the neck of the 46-year-old George Floyd, a Black man, in handcuffs to the ground.

Darnella Frazier’s footage, which prosecutors say shows excessive force, led to waves of protests and anti-police brutality movements calling out seen in the United States in decades. There were daily marches against the unbalanced rates of police violence against Black people as protesters shouted that Black Lives Matter.

Darnella Frazier, an 18-year-old student who told the court she suffers from social anxiety, broke down in tears as she described her feelings of guilt and anger after witnessing Floyd’s arrest.

Donald Williams, a professional mixed martial arts fighter, earlier testified about his increasing agitation as he watched the scene, Floyd struggle for breath, and he was heard on a 911 call trying to report Chauvin for murder.