Football,1 Injury1 Liverpool2 Premier League1 Soccer20
By Ali Irfan Liverpool Football Club’s Premier League title defence is falling to pieces after being struck by a wave of constant injuries. The...

Liverpool Football Club’s Premier League title defence is falling to pieces after being struck by a wave of constant injuries.

The defending champions’ injury crisis began ahead of their fourth game of the season when starting goalkeeper Alisson Becker and winger Said Mane were sidelined due to injuries. As a result, Liverpool lost the game 7-2 to an Aston Villa team who escaped relegation during the previous year by one point. The more significant injury came during the following game against Everton, when Virgil Van Dijk clashed into Everton’s goalkeeper Jordan Pickford, bringing his campaign to an abrupt end.

This led to Liverpool’s eventual position on the table at sixth with 40 points, and current league leader Manchester City on 59. 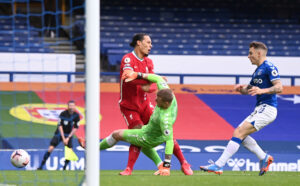 “When you lose the best center back on the planet in Virgil Van Dijk, it’s very very difficult to make up for that, or account for that, and the effect it has on the rest of the team in lots of different positions,” says Liverpool FC supporter and journalist for The Redmen TV, Ben Kelly through a Zoom interview.

More key players started to fall as Van Dijk’s center back partner Joe Gomez received a season-ending injury when he was on international duty with England. Their back-up defender Joel Matip also fell victim during a 2-1 win against Tottenham Hotspur, putting him out for the rest of the season. This forced Liverpool FC manager Jurgen Klopp to use his midfielders, Jordan Henderson and Fabinho in defence. 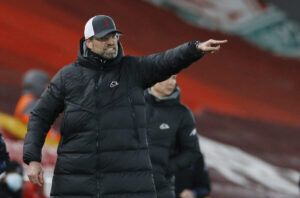 Avid Liverpool fan Roopa Vyas said on a Zoom interview, “it feels like we’re losing more players because we put Henderson and Fabinho at center back, our midfield is lacking now.”

A lack of attacking threat and overall stability caused Liverpool to drop points against lesser opposition. The defending champions failed to score a goal from Dec. 30 to Jan. 21. During this time period, they played Newcastle United, Southampton, Burnley, and Manchester United, the only standout team. They also dropped points to Brighton, Manchester City, and most recently Everton. 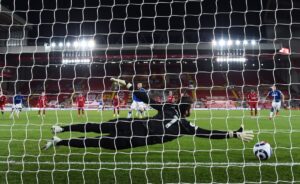 “When you’re playing a centre half partnership of Fabinho and Henderson, you can’t commit the full-backs quiet as high as you want to, you can’t be as creative with them, you’re losing that weapon,” Kelly says. “And then when you lose the full-backs being committed quite as high, you lose the effectiveness of the front three. It’s all a big house of cards, and it’s all fallen down very quickly.”

After Fabinho and Henderson also received long-term injuries, Klopp was forced to bring in emergency centre backs during the winter transfer window. He signed Ozan Kabak from the German league and Ben Davies from Preston North End.

“You bring in two lads who are emerging signings essentially, and they need time to bed in,” Kelly says.. “They’re never gonna be Virgil Van Dijk, so it’s difficult.”

According to Caiomhe O’Neill from The Athletic, 155 games have been missed by Liverpool players in 2020-2021 due to injuries. The most matches missed out of the 155 have been from Virgil Van Dijk with 20, Joe Gomez with 18, Joel Matip with 16 and Naby Keita with 15.