After a year of lockdown, Toronto’s real estate market faces a series of changes. However, the experts say Covid-19’s effects on the rentals market are not that terrible after all.

As the vaccine rollout continues and the economy starts re-opening, the instabilities in Toronto’s real estate market are slowly nearing an end.

The crisis caused by the pandemic has certainly affected all sectors of the Canadian economy. And although the real estate market has undergone many changes, real estate demand has always remained high. Experts predict the rental demand will continue to increase in 2021; however, unlike last year, landlords will now be the ones in the position of power.

According to the Toronto Regional Real Estate Board (TRREB) data, despite the increased vacancy rate in Toronto, the number of apartment rental transactions in 2020 has increased by 21 per cent since last year, reaching a record high of over 40, 000.

Toronto experienced one of the highest vacancy rate increases in the country, caused by strict restrictions for short-term rentals, like Airbnb, that were attracting thousands of non-permanent migrants each year. They could not serve their purpose anymore, which forced investors to bring these properties to the long-term rental market, which lead to the supply getting greater than the demand. Because of this economic instability, the transaction rates in the first two quarters of 2020 were low. However, a significant rent price reduction at the beginning of the third quarter caused the number of rental transactions to go up by nearly 30 per cent and over 80 per cent in the fourth quarter. 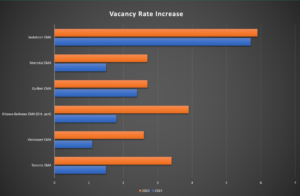 RE/MAX sales representative Elle Iakovenko says once there was a lot more inventory on the market, the prices started going down, giving potential tenants greater negotiation power and an opportunity to take advantage of low prices and upgrade their properties.

“People started trumping around and they started vacating their units and kind of moving one up. They started moving into larger properties for the same amount that they were paying. So, our job as real estate agents never stopped. Just because there was more inventory didn’t mean that we were less busy. In fact, it was the other way around. People wanted to take advantage of these low prices and they actually wanted to get in there and scoop up the properties,” Iakovenko says. 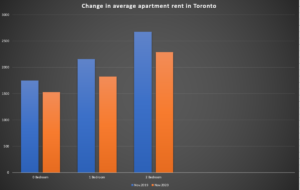 And even though the change in vacancy rates was one reason that caused prices to drop, Iakovenko says a newly occurred trend of people striving to move out from downtown core also played its role. Even though the average rent for downtown units has dropped, the suburbs’ prices also went down, meaning that many people decided to move there to save up even more.

The data provided by TorontoRentals.com confirms the decrease in rent prices in GTA. The average rental price had dropped by 17.4 per cent in North York, which is the GTA’s biggest disparity. It is closely followed by Etobicoke and Scarborough, with the rent decrease of 15 and 16 per cent accordingly, leaving Mississauga to be the area with the lowest change percentage of 13 per cent. 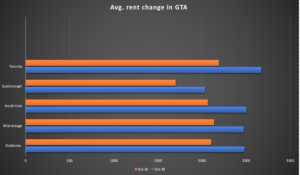 Another important aspect of taking advantage and upgrading your living space, says Iakovenko, is a fixed price for long-term rentals. She explains that every year the government of Ontario releases a rent regulation, which is a percentage that the landlords are allowed to increase the rent by. This way, those who live in the buildings of 2017 and older will only have a fixed rent if they decide to stay after the end of their lease. And even though the rent might increase, it will be a fairly small amount anywhere from 1.9 to 2.2 per cent, which might change according to the economy.

“The markets around the GTA are just going crazy. First of all, it’s always going to be a lower price there. Also, many young professionals were no longer able to afford to live downtown on their own. Many people in the entertainment industry, such as bartenders, servers, and club workers, were jobless and couldn’t afford it. So people started moving in with their parents and migrating outside of the city,” explains Elle Iakovenko. However, she says the majority of people she had to work with throughout the pandemic took advantage of low prices so that they can move in into a cheaper place closer to their workplaces so that they could save up and buy their own property.

Agnes Fraczek, a sales representative at P2 Realty also says that this year has demonstrated people’s willingness to move out of the city and have more privacy, by renting a house or even buying one. She points out it is not as easy to rent a house right now as one might think – the demand has increased dramatically, so have the prices.

“When I look at condos, I see a big drop in pricing, but when I look at houses, I see an increase,” she says, “but even though there has been a decrease of over 20% for condo rentals, houses are still keeping up…at least there’s movement in the market. There’s been a change in supply and demand. You have more supply, but you have a greater demand because people might not want to rent.”

For those who are still in favour of renting an apartment in Toronto or GTA, the situation is already changing, as the economy slowly re-opens and vaccines are being implemented worldwide. The previously strong demand is now increasing drastically, so is the competition. The circumstances are particularly unpleasant for students, especially those who are unemployed and/or are international. Not only it became harder to rent out an apartment, but the lists of requirements had grown in times of pandemic.

Elle Iakovenko says landlords are trying to protect themselves and want to see their potential tenants employed with a high credit score and stable income. Iakovenko says full-time students sometimes struggle to provide all of the above, so they have to find a guarantor that could vouch for them. International students, however, are often deprived of such an option unless they have a family member or a close acquaintance living here in Canada.

Both Iakovenko and Fraczek say they have not seen any landlords cases making concessions to students and reducing the list of requirements for signing a long-term lease.

As for now, according to the report issued by TRREB, the rental demand remains strong and will only strengthen as move through 2021, and the economic situation in the country will continue to improve.