Despite the 2021 National Women’s Hockey League (NWHL) season ending early because of a COVID-19 outbreak, broadcasters like Alexis Pearson are thrilled at the growth the league saw in just ten days, thanks in part to the games being shown on the streaming platform Twitch.

Twitch, a popular video live streaming service owned by Amazon, is often used for people to stream themselves playing video games among other things for audiences, but more recently sports leagues without traditional TV deals like the NWHL have been showing live sports on the platform.

The 2021 NWHL season, already cut down to two weeks in a bubble in Lake Placid, NY due to the ongoing pandemic, was the second in the league’s three-year exclusive deal to show games on Twitch, where fans can watch every game for free. Commentators this season weren’t in the bubble, instead broadcasting from a studio in Florida.

Even if there isn’t a ton of money coming in from the broadcast deal, the opportunity to get as many eyeballs on the league as possible cannot be overlooked.

Josh Appel, one of the NWHL’s commentators during the brief 2021 season, says that the other benefits of streaming on the platform for a smaller, but growing, league like the NWHL are different from those of a traditional TV deal.

“It gives a chance for people who may not be seeking that to find an NWHL game, and there you go, there’s another fan,” he said. “We had a ton of viewers — one of the games I did was on the homepage of Twitch, and we were featured on there. We had 30-something thousand people watching one of our games. People were seeing this league for the first time, and it’s so beneficial with Twitch to get eyes on the game, on the sport, that they would not have otherwise.”

As Appel mentions, Twitch’s homepage has featured channels, as well as ones tailored to what the viewer usually watches on the platform. On the second Saturday of the 2021 NWHL season, January 30, the league’s channel was among those being featured, and the viewership numbers skyrocketed to unprecedented numbers — never seen before in the league’s short history.

Around 1.2 million unique viewers tuned into the games at some point on that Saturday, with the number of live viewers peaking at over 30,000 — an incredible rise from the numbers seen earlier in the tournament and those from previous seasons.

Followers of the NWHL’s official Twitch account also tripled throughout the course of the season.

The record-breaking NWHL broadcast – take a look at that number in the bottom right Photo credit: NWHL/Twitch

In the first few games of the season, numbers were peaking at around 10,000 live viewers, and reaching as high as 150,000 unique viewers in total per day. They went back down again for the final few days before the season was halted, but a major story around the league continued to be the Saturday spike.

“I remember the next day my dad texted me,” Pearson recalled. “I hadn’t even seen [the numbers] yet, and he goes ‘I don’t know if you saw, but the number of unique viewers on that game you were calling reached over a million, you should be really proud of yourself, that’s something to be excited about’.” 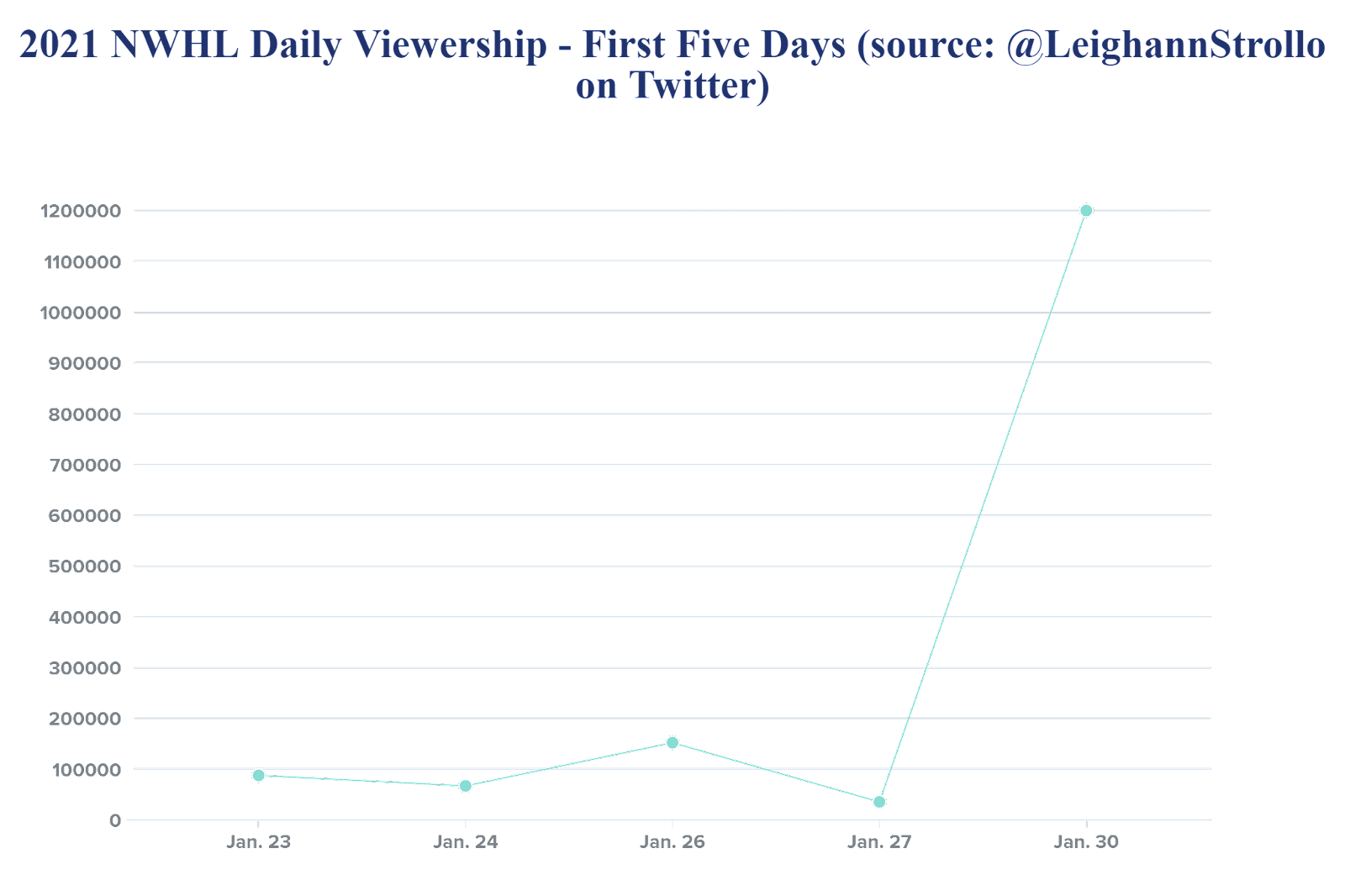 The spike in viewership also saw the number of total viewers increase to around 1.5 million in the first five days of the season, significantly more than the numbers from the first month of the 2019-20 season.

According to numbers released by the league in early November 2019, the first 14 games of that season (and the first 14 during the new partnership with Twitch) played in October of that year brought in 949,065 views, 63% of what they did in the first 12 games in Lake Placid this year. 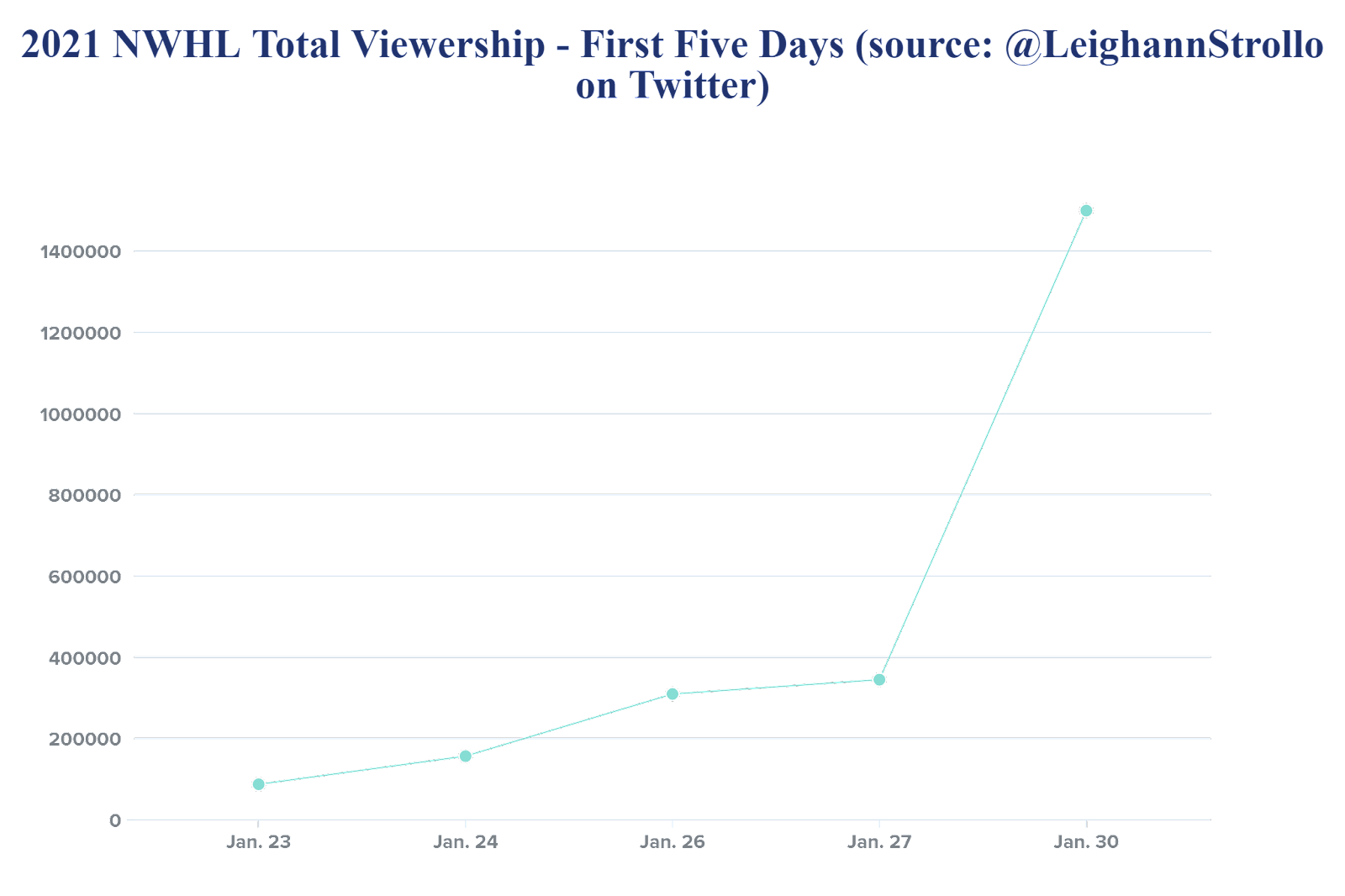 What is attractive about the Twitch streams for a lot of people is the interactivity of it. For another NWHL commentator this year, Josh Eastern, having that instant reaction with the audience is unique, but really exciting, and can help to build a community of passionate fans from around the world.

“One of my favourite things was asking people where they were tuning in from,” he said. “I think that’s such a cool way of building a global reach. We had people from England tuning in, and I’m sure we had people from all over Europe with all the European players in the tournament.”

“Twitch reaches a broader audience,” Eastern added. “You can just be searching through Twitch, and some random person can stumble on it and think ‘oh wow, I’m watching live hockey right now’ and that’s pretty cool. If more leagues want to try to get into that, I think Twitch is a great way to expand that audience.”

Appel agrees, and says he thinks the interaction with commentators and other fans brings people back to watch more games.

“People clearly love that and gravitate to that stuff,” he said. “It’s one thing to just throw a game on a screen and have people watching it, but these are people who are actually able to interact with other people who are also watching, and people from the league might pop in. I saw a bunch of different names, like players who weren’t playing in that particular game but were in on the chat.”

“Sports are supposed to be fun”

At times, messages were popping up in the NWHL chat at such a speed that it was impossible to read them all, especially during some of the fun virtual activities the league set up. During games there were light-hearted things like virtual kiss cams for the cardboard cutouts of fans in attendance, as well as virtual t-shirt cannons and the popular Zamboni cam, which saw Aaron, the Zamboni driver throughout the tournament, become a star in the chat.

Aaron the Zamboni driver, one of the breakout stars of the 2021 NWHL season Photo credit: NWHL/Twitch

Within seconds of a period ending, dozens of messages of support and admiration for Aaron, as well as Zamboni emojis the league made, instantly flooded the chat.

Aaron the Zamboni driver had as passionate a fanbase as any team this season Photo credit: NWHL/Twitch

“Sports are supposed to be fun, that’s why I got into working in sports,” said Pearson. “The Twitch community does such a good job of finding these fun things about sports, whether it be something as simple as the Zamboni, which at the end of the day has nothing to do with the outcome of the game, but they still have fun with it.

“When you’re dealing with a league like the NWHL, which is smaller and trying to get more fans, more sponsors and more attention as it continues to grow, it’s important to have those fun things that make the league unique so you have a way to draw people in,” she added.

The interactivity between commentators and fans was on full display during the first game in Toronto Six history, which was also the first game of the 2021 NWHL season. After hearing Appel pronounce Toronto with the second T, viewers were quick to correct him, insisting that he pronounce it like a local, more like “Tron-o”.

“Everyone was poking fun at that,” Appel said with a smile, acknowledging that it was all in good spirit. “This job is fun, we shouldn’t be taking ourselves super seriously, and it was nice to have a human moment.”

“The fans are not afraid to tell you when you’ve made a mistake,” Pearson added with a laugh. “They’re so welcoming as well as well in the sense that they’ll share something like that. [They’ll say] ‘hey, in our city this is how we do it’, or ‘as diehard fans of this team these are the nicknames we have or the things we associate with this team’.

“That interaction is there, and it’s so healthy. Even if you make a mistake and they call you out on it, it’s in a friendly way.”

Continuing the momentum is the priority

The surging viewership numbers, brought about by both the community of passionate fans and being featured on the main page of Twitch, leave supporters and broadcasters alike hopeful for continued growth next time the league plays games — whenever that may be.

“If you would’ve asked me three years ago if we would’ve had that viewership when I first started with the league, I would’ve said probably not,” said Pearson, who started doing commentary for the league when the Minnesota Whitecaps joined the league in 2018.

“That’s a testament to how hard [the NWHL] have worked to get eyes on the league. That shows in the numbers of people watching, and I take a lot of pride in being a part of that. It’s so exciting and it makes me excited for the years to come and hopefully seeing those numbers continue to rise.”