Charity2 Humber97 Humber Hawks8 volleyball6
After a five-year varsity sports career at Humber College, 2020 graduate Andrew Blakey is set to take on his biggest athletic challenge yet. The...

After a five-year varsity sports career at Humber College, 2020 graduate Andrew Blakey is set to take on his biggest athletic challenge yet.

The former Humber Hawks baseball and volleyball star is set to run from Kleinburg, a town just north of Toronto, to Barrie on November 6 in an effort to raise money for KidSport — a charity that helps parents afford for their kids to play sports.

“I’ve always been fortunate enough where I’ve been involved in sports, and I’ve had a lot of great opportunities come my way because of it,” Blakey said to Skedline.com. “Growing up I saw kids, whether in my friends circle or at school or wherever it was, I saw a lot of kids who unfortunately weren’t able to take part in sports, or take part in further opportunities with sport.

“Whether that means a higher calibre team, or even just play a sport in general, they weren’t able to do that because of financial constraints or not being able to afford it. I would say it’s my way of paying it forward a little bit.”

Blakey pointed out that one in three kids aren’t able to play sports because of financial constraints, a number which he said is “not right”, and the inspiration behind the fundraiser.

The run itself is expected to be between 60 and 65 kilometres in total. He will leave Kleinburg around 4 a.m., and expects to take between seven and nine hours to reach his destination.

“My background is in kinesiology, and I’ve studied the science behind training, so I do have a very good foundation for creating a training program for something like this,” he said of his preparation. “The weekends are when I do my longer runs, and each weekend I’m working up a little bit more.

“During the week I do shorter runs, I do 10 km on Monday and Thursday, and I’ll put in a shorter run between 3 to 5 kilometres just to loosen up the legs after a longer run.”

Having never run a distance like that before — his personal record is around 20 or 21 kilometres — it’s Blakey’s determination to reach the finish line that will push him forward with a distance that would be classified as an ultramarathon.

“When I think about Andrew, one word comes really comes to mind for me and it’s ‘tenacity’,” said Wilkins, mentioning that Blakey actually switched from baseball to volleyball while at Humber, and at times played for both varsity teams. “It didn’t matter what the challenge was, he was just going to work hard and overcome it. Andrew is such a personable guy. His ability to draw people in, keep them entertained, and keep them focused just lends to his leadership.”

“This charity run — nobody’s forcing him to do this, this is him and his way to give back to the community, and it’s showing that outside of Humber he’s continuing to be a leader.” 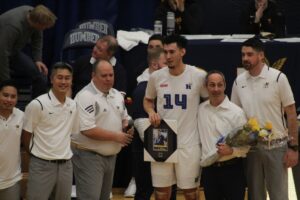 In addition to the physical benefits of playing sports, both Blakey and Wilkins are also adamant about the importance of making friends and learning life skills, believing that’s another reason why charities like KidSport are important.

“If you talk to all of my alumni, I think all of them will tell you that when you get a chance to play a varsity sport at Humber, it’s a special moment in your life,” said Wilkins. “It helps you create memories that, quite frankly, other people don’t get to do.

“These guys make bonds with some of their fellow players that will last a lifetime. It was good that Andrew recognized that, and it goes to show that he’s got friends for life on this team. I’ve got kids playing for me now that have played with Andrew who say the same thing, they know that they can call on a guy like Andrew any time and he’ll be there for them.” 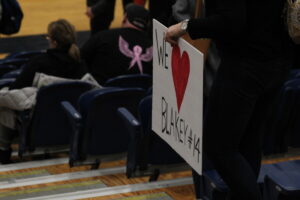