COVID197 James Bond1 movie4 movie theatres1 No Time to Die1 Shang-Chi1 vaccine passport7 Venom2
After a year of streaming at home, people are excited to be able to go out to the movies again. “I missed it so...

After a year of streaming at home, people are excited to be able to go out to the movies again.

“I missed it so much,” says Alex Arena, an avid movie-goer and singer. “There’s a huge energy and atmosphere difference when you’re at home alone or with a loved one versus when you’re with a lot more people that has the same kind of excitement as you. You can literally feel everyone’s excitement with you, and cheer and be so excited and let that energy out.”

Since Ontario’s implementation of the vaccine passport, all indoor environments, including cinemas, require all their patrons to be fully vaccinated.

Cineplex director of communications Melissa Pressacco says the passport rollout has been smooth since its inception on Sept. 22.

Pressacco said in the email Cineplex has been using VenueSafe, a set of protocols and procedures that Cineplex follows every day to keep employees and guests safe in accordance with provincial guidelines.

Imagine Cinemas spokesperson Jennifer Egget says the audience response to the mandate has been positive. 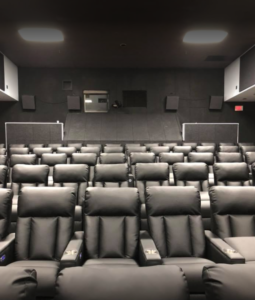 That safety has to do with the extra steps in cleaning procedures theatres have to follow.

“We’re doing even more cleaning than we’ve always done before on a more regular rotation now,” Egget says. “Making sure we’re cleaning the lobby, cleaning all those high touch surface areas regularly, going into the washrooms, doing even more checks than we were before and cleaning those auditoriums after any patrons have been inside.”

Cinemas have also had to adhere to the physical distancing guidelines, where each auditorium is restricted to a 50 per cent seating capacity.

Arena says she’s glad theatres are doing all they can to help feel movie-goers like her safe.

Before its opening, it had been delayed a few times during the pandemic before Sony Pictures moved up its release date to Oct. 1. Meanwhile, Universal Studios gave the James Bond film No Time to Die a final theatrical release date of Oct. 7 after being delayed continuously over the last year.

Egget says with No Time to Die finally premiering this weekend, everyone on all sides is excited.

“We’re super excited to be open again and going into the Bond movie of this weekend, we’re hoping for a great turnout. We’re very excited for it.”

If there’s anything to be said about theatres reopening, nothing beats watching films on the large screen with a large popcorn and drink.

“Canadian movie lovers are excited to be back in our theatres once again, watching films on the big screen the way they were meant to be seen,” Pressacco says.

Josh Welsh is employed part-time as a manager at Imagine Cinemas. Jennifer Egget is also the human resources manager at the company.